Latest addition to the A5 and S5 ranges revealed, with UK launch in March 2017

The latest model in the expanding Audi A5 range has been revealed. The new Audi A5 Cabriolet - and high-performance S5 Cabriolet - join the existing A5 and S5 coupe, and A5 and S5 Sportback.

As you’d expect, the Cabriolet models share much with the coupes, which in turn are only subtly differentiated from their predecessors - you’d need to be an existing owner or have the old and new cars positioned side-by-side to discern any significant changes.

Like the previous car but unlike the A5’s 4-series Cabriolet rival, the latest model uses a conventional folding soft-top rather than a retractable hardtop. The new roof is one-touch in operation, a quick tweak of the switch being all that’s needed to drop (in 15 seconds) or raise (in 18 seconds) the roof, at speeds of up to 31mph.

The most significant changes, like the coupe and Sportback models, are in weight reduction and torsional rigidity. The former has dropped by up to 40kg (though the lightest model, the 2.0 TDI, is still 1690kg), while the latter has increased by 40 per cent. Reinforced sills and extra struts in the frame make up for the lack of roof, and in the case of an accident, aluminium roll bars can extend for extra protection. 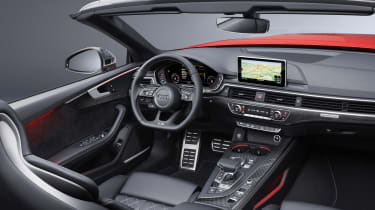 The S5 uses the same 3-litre turbocharged V6 as the S5 coupe and Sportback, putting 349bhp and 369lb ft to all four wheels through an eight-speed tiptronic automatic transmission. It should reach 62mph from rest in 5.1sec (slower than both coupe and Sportback, which are 4.7sec) and hit a limited 155mph.

Five other engines will be offered in Germany - two 2.0 TFSI petrols (with 187bhp and 249bhp), a 187bhp 2-litre diesel, and a pair of 3.0 TDI diesels in 215bhp and 282bhp outputs. The UK lineup should be broadly similar, though both coupe and Sportback also offer a 1.8 TFSI and a lower-output 148bhp 2.0 TDI. A choice of six-speed manual, seven-speed dual-clutch and eight-speed tiptronic automatic transmissions are available depending on the model.

> More: Audi A5 Sportback goes on sale in the UK

Elsewhere, all is as-per the other A5 and S5 models - Audi’s 12.3-inch virtual cockpit instrument display is available, complemented by an 8.3-inch central display (an MMI 7-inch setup is standard) paired with MMI navigation plus and MMI touch, while an LTE module enables the use of Audi Connect online services for three years, and an in-car WiFi hotspot.

Full UK pricing and specification details will be revealed closer to the model’s UK launch in March 2017. 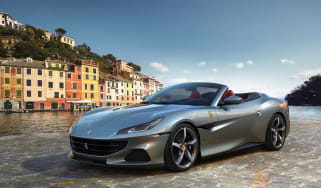