Step two of Audi's large car revitalisation, the new A7 Sportback features much of the A8's tech in a sleeker package 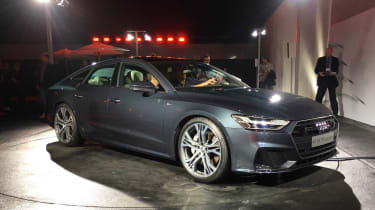 Audi has finally pulled the wraps off its all-new A7 Sportback. Following on from the leaked images of a scale model that we published recently, our first sight of the actual car reveals that it follows the same successful template as its predecessor. Although, at a glance, it looks remarkably similar to the old model, the newcomer hides a host of technical innovations, including four-wheel steering and a hybrid powerplant, plus it debuts Audi’s new naming strategy. Order books for the new A7 will open in the first quarter of 2018 and customers can expect to get their hands on them before the second half of the year.

The latest A7 is fairly conservative in its design. It’s a handsome and low-slung affair, but the styling doesn’t stray too far from the path that’s already been well trodden by the previous generation A7. Yet this car follows Audi's new design philosophy, so although its sillhouette and proportions look familiar, there are some sharper creases and neater detailing that help create the new more dynamic look. 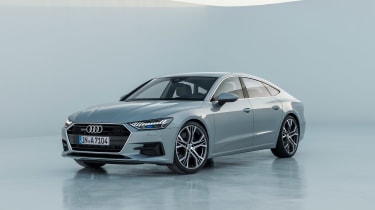 As well as a new design language – one that we saw previewed by the Audi Prologue and has also dictated the style of the new A8 – Audi has opened an entirely new design centre. Based at its headquarters in Ingolstadt, the new purpose-built building is home to every aspect of Audi’s design process; from concept through to clay modelling and prototyping, and final styling. The new centre, like many modern buildings, features a lot of glass to help get the designers’ juices flowing by seeing the outside world but has been created to help maintain privacy, too. As well as workspaces and offices, the structure features massive super computers to help simulate design concepts in specific environments, but also has areas where actual cars can be shown off for presentations. The A7 and A8 are the first production cars we’ve seen to come out of the new design centre. 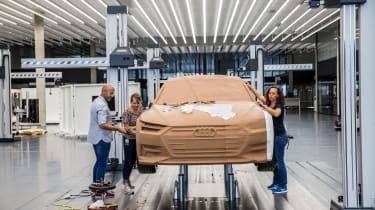 Some of the most distinctive elements created in the new design centre are the A7's lights. Rather than a thin LED strip to create a shape for the headlight, the A7 uses vertical blocks of light to make up the shape of the front daytime running lights. You also get the option to upgrade to an LED matrix set-up with a Laser main beam function. The rear units use a similar technique and style as the front DRLs, but rather than emit a cool white, they glow red. At the rear there’s also a full width LED tail light complete with Audi’s scrolling indicator signature.

> Click here for our first drive of the new Audi A8

The major visual changes have been reserved for the cabin, which looks to cement Audi’s reputation for delivering the most eye-catching and upmarket interiors in the business. The slick-looking dashboard is a masterclass in understated premium design, while the trio of TFT touchscreens add a sheen of hi-tech appeal. The two centre console-mounted screens (10.1-inch top and 8.6-inch below) control the sat-nav and infotainment functions, while ahead of the driver is the familiar 12.3-inch Virtual Cockpit, which is fully configurable. 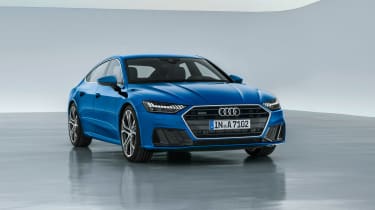 Currently the only engine that’s been announced is the 3.0-litre V6 TFSI petrol. Now badged 55, it’s backed by a mild hybrid system that aims to boost efficiency. The 48-volt system allows the A7 to coast silently in free-wheeling mode at speeds of between 34 and 99mph, using the belt alternator starter unit it fires the internal combustion engine when needed. The system allows the start-stop function to activate at speeds of up to 14mph, while linking it to a forward facing camera allows the engine to restart as soon as it senses the traffic ahead is moving.

Peak power is 335bhp and maximum torque is 369lb ft, which translates to a 0-62mph time of 5.3sec, while top speed is limited to 155mph. It’s frugal too, with Audi claiming 41.5mpg at the pumps and CO2 emissions of 154g/km. A seven-speed twin-clutch S-tronic gearbox is standard, which is mated to Audi’s quattro four-wheel drive transmission. Other six-cylinder petrol and diesel engines will join the line up later, as will a number of four-cylinder units.

Other changes under the skin revolve around the steering and suspension. Available as an extra is the new dynamic all-wheel steering, which aims to improve both low speed agility and high-speed stability. Below 37mph the rear wheels turn in the opposite direction to the fronts, by as much as five degrees, helping to cut the turning circle by 1.1 metres. At higher speeds the rears follow the fronts, helping to reduce understeer and deliver quicker direction changes. As with other models, a variable ratio steering rack is standard equipment.

There are four suspension systems – a standard coil spring set-up, a 10mm lower Sport package, optional adaptive dampers and, finally, self-levelling air suspension. All are controlled by the electronic chassis programme, which monitors parameters such as the damping and steering to optimize ride and handling characteristics. Also available is the sport differential, which sits on the rear axle and actively distributes torque between the rear wheels for improved traction and agility.

For those not particularly fussed about driving, the A7 features a host of technologies aimed at autonomy. In total there are 39 driver assistance systems, including the AI function that allows you to remotely park the car in a space or your garage – much like the BMW 7 series. There are also the usual suite of city driving aids, such as autonomous emergency braking and adaptive cruise control with active lane assist for the steering.