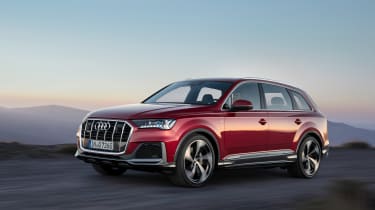 Audi’s three-row Q7 SUV has been updated for 2019, gaining a fresh interior, more rugged styling and a wider adoption of mild-hybrid tech across the range. Audi is hoping these updates will keep the Q7 competitive against newer rivals in the latter half of its life cycle.

Where the Q7 was once an SUV of gargantuan proportions, new seven-seater rivals like the Mercedes GLS and BMW X7 have now overtaken the Audi in terms of proportions and price. Instead the Q7 will continue to rival the slightly smaller GLE and X5, both of which are now available with optional third rows.

The biggest upgrade is the all-new interior, an unusually substantial modification for this type of mid-cycle refresh. Rather than the horizontal aesthetic that featured before, the new Q7 now shares its dash, console and doors with the Q8. The new architecture is defined by Audi’s dual MMI touchscreens and a liberal use of gloss black trim to hide the junctions where the digital displays begin and end. The effect is definitely futuristic, and although the previous layout was still very much up-to-date, the new interior does add a welcome dose of glamour Q7.

Outside the changes are less drastic, but the effects definitely felt. New lighting units front and rear mimic other Audi models like the Q8 and new A4. Audi’s designers have been keen to point out the added emphasis on the utility bit of the Q7’s SUV tag via extended use of contrasting colours and the addition of larger wheels to make it look more rugged and capable than the previous model.

Under the skin Audi has incorporated its mild-hybrid system across the wider range, with all Q7 models now fitted with a 48V electrical system borrowed from the SQ7. As in the performance flagship, the 48V system powers an optional active roll stabilisation system and assists the internal combustion powertrains with a small electric motor and battery pack. Rear-wheel steering, adaptive sports air suspension and new matrix LED headlights with a laser high beam system also occupy the options list, bringing the Q7 right up to date against rivals in terms of incorporated tech.

Three powertrain options will be available on the Q7 at launch in the UK - the 45TDI, 50TDI and 55TFSI variants. All three feature 3-litre turbocharged V6s, all familiar from elsewhere in the Audi model range. A few months after launch a new plug-in hybrid 55TFSIe will also be available, pairing a four-cylinder petrol engine with a much larger electric motor and lithium ion battery pack. The SQ7 retains the 429bhp V8 TDI powertrain that’s identical to both the previous model and the new SQ8. Sales commence from September this year, with UK pricing due later in the summer.