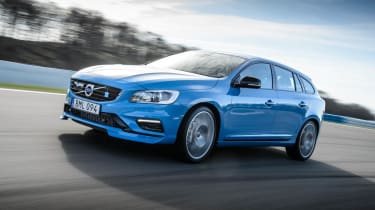 When the Volvo V60 Polestar debuted it did so with a high-performance inline-six cylinder engine with ruinous fuel consumption but a glorious bellow and strong - if not class-leading - performance. As part of a rationalisation in Volvo's range the current Polestar has only a two-litre twin-charged four-cylinder unit and it's lost some character as a result, but as a package the V60 Polestar is quite compelling.

It's a neat handler, has great brakes, and looks fantastic, but it's expensive and doesn't have the performance of similarly-priced cars. It's unlikely to steal many sales from BMW, Audi or Mercedes-Benz, but we applaud anyone willing to tread Volvo's alternative path.

There is just one option available for the Polestar, which is a selection of colours. Four are available, two metallics and two solids – Bright Silver and Onyx Black are the metallic finishes, while Ice White and Rebel Blue are the solid choices. And it has to be Rebel Blue. It’s the signature hue for the Polestar and it suits the car down to the ground, instantly marking it out to those in the know as a quick Volvo.

It makes sense that Volvo chose its mid-sized estate as the basis for Polestar’s first production vehicle (in other markets, an S60 Polestar saloon is also available but that’s not coming to the UK), as, on these shores, the brand is synonymous with rapid yet discreet wagons. Vehicles like the 850 T5, with its links to the BTCC racers of the mid-1990s, laid the groundwork for this V60 Polestar, so it’s not totally unprecedented in the Volvo range. 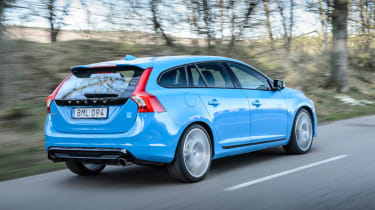 > Performance and 0-60 time - Despite engine downsizing the V60 Polestar has knocked two tenths of a second from its old 0-62mph time, but doesn't sound as good.

> Engine and gearbox - Two litres rather than three, twincharged rather than turbocharged, and an eight-speed auto rather than a six-speed. Plenty of power though, and quick shifts.

> Ride and handling - Not the Polestar's strongest suit, but it's fluid, neutral and tidy and has great traction from the all-wheel drive system.

> MPG and running costs - MPG of 34.9 and CO2 of 186/km are both significant improvements on the old car and should cut running costs by a fair chunk.

> Prices, specs and rivals - At just shy of £50k the Polestar is up against strong competition, but some will be happy to pay that simply to be different.

> Interior and tech - The V60 cabin isn't the most high-tech but it's wonderfully comfortable and feels well-built. Polestar touches are subtle but do lift the ambience.

> Design - In our subjective opinions the Polestar looks fantastic, particularly in 'Rebel Blue'. 20in wheels fill the arches well.