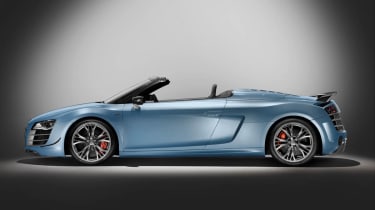 Here is the new Audi R8 GT Spyder. A year after unveiling its light-weight, stripped-out, semi-race version of the R8 supercar, Audi has announced it will introduce a sunburn special of the same car.

Sprinting from 0-62mph in a Lambo-beating 3.8sec before hitting a 197mph top speed, the R8 GT Spyder has had 85kg stripped from the R8 Spyder’s aluminium frame thanks to carbon-fibre skin and seats. The mid-engined supercar weighs 1640kg, thumps out 552bhp and 398lb ft from its 5.2-litre, direct-injection V10 engine and is based around an aluminium space-frame chassis weighing just 214kg.

Each car will have its own build number stamped into the top of the gear lever to remind drivers that the long rear side panels, the front bumper, the rear spoiler and the rear bumper are all made of carbon-fibre reinforced polymer (CFRP), which saves 5.5kg over the standard R8 spyder. The addition of glass-fibre-reinforced polymer seats saves 31.5kg over the standard, electrically powered units to create the largest single weight saving.

Even so, the R8 GT Spyder is considerably heavier than Lamborghini’s Gallardo LP570-4 Performante, which weighs just 1485kg from the same core architecture and has 10bhp more, even though it claims a 0-62mph sprint a tenth of a second slower than the R8 GT Spyder.

The R8 GT Spyder's performance is directed through the six-speed, robotized gearbox (again, no manual) and it uses the all-wheel drive system from the rest of the R8 range.

The car will have an on-board lap timer as standard, while the body is lowered 10mm over a standard R8 for sharper handling and the ESP can be completely deactivated. Audi has also made some small styling tweaks to identify the GT version as something special, including a dual lip front spoiler, round exhaust pipes, a larger diffuser and darker tail lights.

In Germany, the R8 GT Spyder will retail for 207,800 euros, before taxes, and sales begin in October. That means UK prices could be very close to £200,000, almost twice the price of a regular R8 Spyder and a steep climb over the £142,000 R8 GT coupe. British enthusiasts may (again) despair, though, because all of the 333 planned production cars will be in left-hand drive.