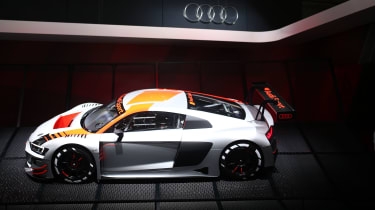 To many people’s disappointment, Audi hasn’t revealed the facelifted R8 at this year’s Paris motor show. Instead, Audi Sport took the covers off its new, updated race car, the R8 LMS GT3. But, underneath the wings, splitters, canards and vents of the GT3 racer, there are pointers to how the updated R8 road car will look.

The most notable is the trio of air vents above the front grille. These inlets, inspired by the vents on the front of the 1984 short-wheelbase Audi Sport Quattro, have also been seen on the new A1. Just because they’re on the race car doesn’t mean they will make the final production model, but as they feature so prominently on the R8 LMS GT3’s nose we’d put money on them appearing on the facelifted R8.

> Click here for our look at the Paris motor show 2018 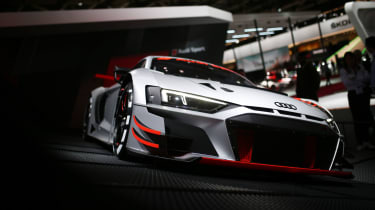 As well as teasing us with what the next R8 might look like, the show car exhibits the evolutionary changes Audi Sport has made to its GT3 race car. The improvements have been made with gentleman drivers in mind, particularly with regard to its aerodynamics. It now offers more consistent levels of downforce while cooling has also been improved along with the durability of the transmission.

From seeing the various disguised prototypes over the last few months it would appear the most obvious change that will feature on the facelifted R8 are a set of revised and remodelled bumpers, featuring reshaped and refined air intakes at the front and a revised rear panel sitting below the rear lights. At the rear the exhaust pipe tips have ditched the current trapezoidal look for oval examples, which are more in keeping with the rest of the range. 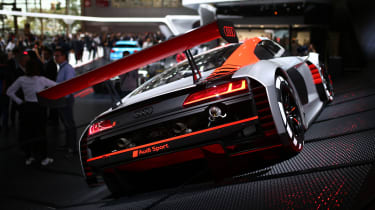 This change of exhaust arrangement has also prompted the question as to whether he facelifted R8 will feature a new, entry-level, engine choice. The V10 will continue with a tweak here and there to enhance power and emissions but there have also been rumours that a twin-turbo V6-engined example could be lined up as a less expensive route into R8 ownership. We’ll have to wait for official confirmation later this year but our feeling is that the R8 will remain as a V10-only model – it’s a halo machine and a lesser engine example could reduce the R8’s exclusivity and cachet.

The engine in the R8 LMS GT3 is, apparently, virtually unchanged as any significant performance updates would be negated by Balance of Performance regulations. If you fancy one as a track toy you’ll need €398,000 (plus VAT) to buy the revised race car, although if you’re already an owner an evolution kit to bring last year’s car up to 2019 spec is on offer for €28,000, again plus VAT.