Audi has let us have a go in the electric R8 that it developed, but then decided not to put into production. Have green supercar buyers missed out? 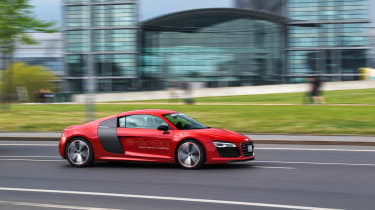 The electric Audi R8, driven here in prototype form. Which is the closest that we’re ever going to get to seeing one on the road – Audi cancelled plans to build a production version earlier in the year, with the prototypes now being used as development hacks for the company’s various electric drive technologies. Our drive was limited to a short test track at the former Tegel airport in Berlin, although it did demonstrate the car’s impressive capabilities.

Where to start? Although it looks like an R8, the e-tron is almost completely different from its petrol-fired sister, being built around a unique aluminium spaceframe and with extensive use of carbonfibre reinforced plastic. The upshot is a car that weighs 1780kg, despite carrying a 577kg battery pack, with the body being both 23kg lighter (and considerably stiffer) than the standard R8. Indeed, the transformation is so great that the only shared components between the two cars are the doors, windows and side sills.

In place of the standard R8’s petrol powertrain, the e-tron carries a vast battery pack containing 530 individual cells. This includes both a central ‘ backbone’ that goes in the car’s transmission tunnel, and a taller block of cells to fill that space normally occupied by the standard R8’s V8 or V10 engine. The lithium-ion battery pack has a total capacity of 48.6kw/h – slightly less than a Tesla Roadster – and with a water cooling system to maintain optimum temperature. This drives two 140kW electric motors, which in turn drive a rear wheel each via single-speed planetary reduction gearboxes. Unlike the standard R8 – or Mercedes’s four-wheel drive SLS E-Cell – the front wheels are unpowered, making this a non-quattro R8.

Audi regards the R8 e-tron as a technology testbed, with some other highlights including both the use of wound carbonfibre springs, and also a carbon and aluminium front anti-roll bar assembly that weighs just 2.5kg. It also gets a camera rear-view system (as the view backwards is restricted by the battery pack) that’s almost identical to the one Audi used on last year’s Le Mans car.

With the proviso that we only experienced it on a tight and twisty test track, remarkably well. The electric motors give instant urge from rest, and the R8 blasts off the line in fine style with progress accompanied by a strange engine-like noise that – as is increasingly the way with electric cars – is synthesised and then piped into the cabin by loudspeaker. The throttle pedal has far more proportionality to it than the almost on-off switches of some electric cars, and although the lack of gears takes some getting used to (especially as there are still paddles behind the steering wheel, of which more later), the level of acceleration didn’t diminish up to the peak 70mph or so that the track allowed.

Cornering is impressive. The e-tron hides its mass well, and the low centre of gravity bequeathed by the battery pack’s position helps it to turn in extremely well. Grip levels feel subjectively better than those of a standard R8, and some clever torque vectoring at the back helps to keep the car on line as the limit approaches. Audi’s engineers claim the clever torque management means the R8 didn’t need the weight or complexity of a four-wheel drive system; although this is surely an argument that could be made against the majority of the company’s quattro models. (At least, it could when it’s not snowing.)

As you’d expect given the powertrain, the e-tron uses electrically assisted steering, which offered decent feel on track. And with the stability control switched to its more permissive ‘sport’ mode (Audi unsportingly denied us the chance to fully de-energise it; the prototypes cost more than €1m each) the car could be felt to move around nicely in response to the throttle. The brakes were particularly good, blending both regeneration and conventional braking far better than most such systems. The steering wheel paddles being retained so you can decide how much ‘regen’ you want. Turned all the way up just lifting off the throttle creates similar deceleration to braking moderately hard in an ordinary car.

It doesn’t. There are just 12 e-tron prototypes, and none will be sold to the public. Audi’s engineering boss, Wolfgang Durheimer, claims that there was no way to make the numbers stack up to put the e-tron into even ultra-limited production. He says that battery cost and weight would both have to fall by around half to make the e-tron viable. That’s a shame; especially as – in the AMG E-Cell SLS and i8 – both Mercedes and BMW have put their money where their mouths are…