As well as extra power, Abt’s latest tuned Audi wears a new set of wheels with a carbonfibre aero lip 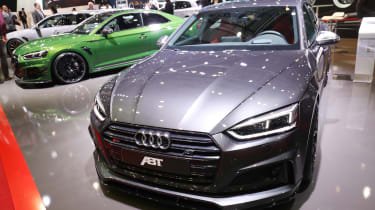 The Geneva motor show is a heaven for tuned cars, there’s always a strong presence from the big European aftermarket firms. Abt, one of the most prominent tuners of VW Group cars, is at this year’s show with a selection of its latest Audis. As well as its current RS3 Power R, RS5-R, S5 and SQ5 Abt has brought along its new RS4-R.

Now in its fourth generation, the standard Audi RS4 is more potent than ever. Its 2.9-litre twin-turbo V6 produces 444bhp and 443lb ft, combined with its four-wheel drive quattro traction, as a result we’ve not found it lacking in performance. Its official figures, a 4.1sec 0-62mph and a top speed of 174mph – if you pay to raise the limiter – back up our impressions.

However, Abt hasn’t let the RS4’s inherent pace stop it trying to extract even more power and speed from the estate. Thanks to its add-on ECU and sports exhaust system (with 102mm carbonfibre tailpipes), the Kempten-based tuner has coaxed 523bhp and 509lb ft of torque from the V6. 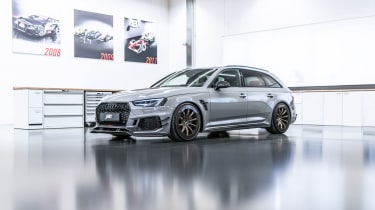 It’s the same power and torque that Abt has turned the RS4’s coupe sibling, the RS5, up to. The engine’s extra performance trimmed three-tenths of a second off the RS5’s 3.9sec 0-62mph time. So, although Abt hasn’t released an official acceleration time for the RS4-R, we can safely assume it’ll be under 4sec.

As well as added performance, Abt has given the RS4 a more menacing look with a new carbonfibre front lip, dive planes and a new diffuser-style rear skirt. For the basic RS4-R package the standard 19-inch wheels have been replaced by a set of 21-inch items.

> Read our review of the Audi RS5

However, the show car is sporting a special wheel 21-inch from Abt that first appeared on a project RS6 it’s developing with Alpine ski racer, Jon Olsson. The new wheel, called Abt’s Aero Wheel, features a carbonfibre disc that runs around the rim. The disc looks semi transparent because the contours of the wheel’s spokes have been painted onto its outer surface.

The Aero Wheel’s design has been inspired by Formula E, a series Abt has been racing in with Audi since 2014. The added disc is predicted to reduce drag as well as adding a new area the car can be customised. The Aero Wheels are currently just a concept, but Abt hopes to bring a limited edition batch of these wheels to production soon. 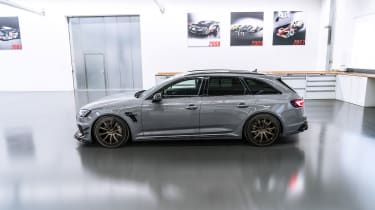 Enhancing the look of the Audi Avant while adding with real performance benefits, are Abt’s chassis upgrades. The RS4-R has new anti-roll bars and Abt’s own lowering springs. A fully adjustable, coilover set up is currently under development with Abt’s suspension partner KW.

Inside, Abt’s RS4 has part-leather seats and floor mats with embroidered RS4-R logos. There’s also a carbonfibre trim around the steering wheel and on top of the gear selector. The finish touch is the illuminated Abt start button.