Already-potent Audi RS5 gets power and suspension tweaks and races to 62mph in 3.6sec 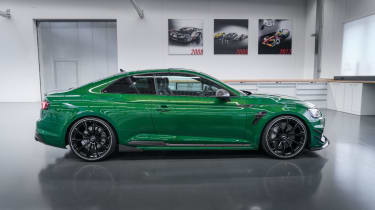 Whatever your view on the rise of turbocharging as a catalyst for more power, there’s no doubt it’s allowed the performance of everything from city cars to supercars to climb at a huge rate over the last decade or two.

It’s also made the job of tuning companies a great deal more straightforward, allowing those able to crack the ECU’s code to significantly boost output with a few taps on a laptop keyboard.

Exhibit A is German firm Abt’s take on the Audi RS5. Already a swift car – and one we’re enjoying running long-term in the evo Fast Fleet – Abt’s package lifts power from 444bhp to 523bhp, with a corresponding increase in torque from 443lb ft to 509lb ft.

That chops the 0-62mph time – already under four seconds at 3.9sec – by a further three tenths. Not bad at all for a car with the RS5’s levels of serenity and comfort behind the wheel.

That said, Abt’s other changes for its dedicated RS5-R model probably give the driving experience a harder edge than standard. It comes with a new exhaust silencer section for a start, which should add a few decibels, while the suspension is altered by the use of Abt height-adjustable springs and Abt anti-roll bars. A full coilover setup will appear at a later date. 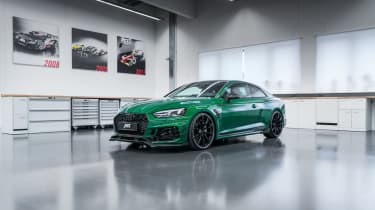 Aesthetically, Abt’s demo car features the same shade of green paintwork as our own long-term model, though other shades are of course available. More unique are the 21-inch alloy wheels – 2-inches up on standard – wrapped in 275/25 ZR21 tyres.

Aerodynamic elements include front and rear splitters, optional wheel arch vents and a rear spoiler. Inside, the RS5’s standard interior gains Abt badging, a new cover for the transmission lever, and RS5-R branded seats. 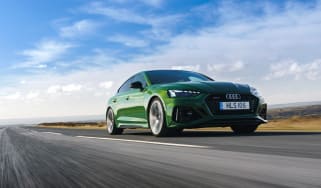