If you want to buy an Audi RS6 or RS6 Avant, here's everything you need to know 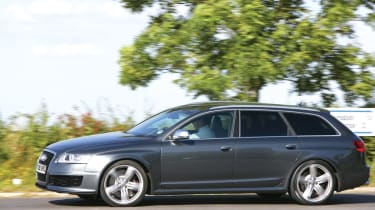 The first Audi RS6 had a plethora of faults afflicting engine, gearbox and suspension, but the V10 car put Audi’s reputation for solid build quality back on track. Very little goes wrong with them. That said, despite early models being three years old now, high-mileage examples are rare.

Those early cars are now out of warranty and are finding their way into Audi specialists – such as Cheshire’s Unit 20, whose Martin Adams is our guide here – to escape main dealer labour rates, so don’t be alarmed if the car you’re looking at doesn’t have a full Audi dealer service history.

The bi-turbo V10 has proven pretty much bulletproof, although a few early cars suffered loose or fractured oil cooler pipes. RS6 cognoscenti reckon to have heard of only one complete engine failure, and even that might have been just a rumour.

Tuning is becoming popular now that older models are becoming more affordable. A remap lifts the power output from the standard 572bhp all the way to about 700bhp; fit sports cats and hi-flow air filters and you’re looking at 760bhp, while bigger turbos lift the total to 850bhp. Unit 20’s Martin Adams reckons the V10’s standard internals are well up to big figures.

Unlike the previous model’s ’box, the six-speed Tiptronic auto in the V10 RS6 is trouble-free. Adams advises that to ensure it stays that way, you should change the gearbox oil and filter every 20,000 miles: the £360-or-so cost to do so seems a worthwhile investment for silken shifting.

As yet there are no horror stories concerning suspension or brakes. The latter – huge 390mm diameter, 36mm deep two-piece discs on the front – are said to cope well with trackdays, despite needing to slow down two tons of fun. Audi can provide optional 420mm ceramic discs if you’re still concerned about stopping power, provided you can afford their £12K cost…

At such a tender age, the RS6’s bodywork should still be immaculate. Ditto the interior, except in a few isolated cars where the driver’s seat bolster has gone a little saggy.

The V10 RS6 was launched a mere three-and-a-bit years ago, and already early cars are worth just half of their original price. Some dealers are taking a punt and pricing RS6s on the other side of £50K, but the reality of the matter is that a car with about 30,000 miles on the odometer is yours for roughly £40K.

Dealers will try the ‘low mileage’ and ‘big spec’ ruses to shake more money from your pocket, but very few RS6s have big mileages and almost all were pretty well specced, so stand your ground. However, the run-out ‘RS6 Plus‘ had about £8K’s worth of options (but no mechanical upgrades), so attracts a premium. Useful contacts