Official economy in the low 20s, but capable of 30mpg on a cruise. 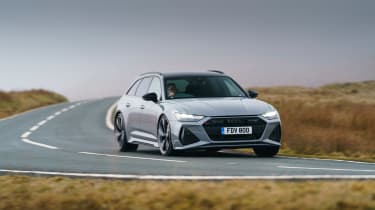 Mild-hybrid technology and cylinder deactivation do their best to pull respectable fuel economy figures from an otherwise performance-orientated engine. They’re not magic though, so a combined figure of up to 22.8mpg is as high as you’re getting officially, and CO2 a minimum of 281g/km, putting it in the highest VED bracket.

The reality might actually be better though. While the V8 will indeed slurp fuel when you’re using its full potential, we’ve found the RS6 surprisingly frugal on a longer run, achieving a nice round 30mpg on a recent trip from Northamptonshire to Yorkshire for a test. The cylinder deactivation kicks in quite frequently if you keep things steady, and a coasting function in the transmission allows the engine to kick out when you decelerate, starting up instantly when you prod the accelerator