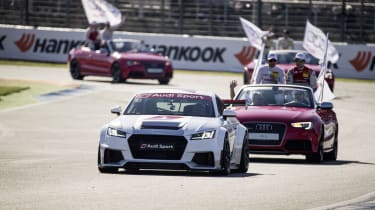 We’re big fans of single make racing championships here at evo. We’ve been watching Clios bang doors in the Clio Cup for years, and we’re all excited to see Mazda’s forthcoming MX-5 get its own international series next year. With this latest Audi Sport TT Cup race car, we now can’t wait to see the new TT gaining its own share of on track action. I mean, who wouldn’t welcome such a raspy, crackling and angry looking car to the pitlane?

Based on the fastest road going TT, the TTS, the Cup race car’s 2-litre TFSI engine pushes out the same 306bhp but can produce an extra 29bhp in overboost mode, available in short ‘push-to-pass’ bursts.

This might fall short of B&B’s tuned road going 355bhp TT’s output, but thanks to the race car shedding some 335kg of weight (tipping the scales at a skinny 1125kg), every last brake horsepower can be extracted with much more effect.

Laying that power down might be a little more of a challenge on track too, because the slick-shod race car ditches quattro four-wheel drive for a lighter, rear-wheel drive setup. This should also provide spectators with a lot more visual excitement; there’s nothing wrong with a BTCC-esque ‘dab of ‘oppo…’.

While we’re on the subject of the BTCC, the TT Cup Racer gains a similarly angry turbo soundtrack to its cars. A soundtrack of dump-valves, spluttering exhausts and growling induction will all be a welcome part of the show.

The Audi Sport TT Cup race car joins the Audi R8 LMS ultra, Audi RS 5 DTM, Audi R18 e-tron quattro Le Mans prototype in Audi’s racing arm, and will hit the track in 2015. It replaces the VW Scirocco R-Cup as Germany's entry-level race series and will see 24 drivers, 18 of which will be paying customers and six of which will be special, invited guests, compete in two 30-minute long races at each circuit.

The new championship supports and is backed by the DTM (which Audi won this year) and costs just short of £80,000 a season. That buys you the car, a year’s worth of car preparation, a mechanic, coaching from World Champion racing driver Markus Winkelhock and a VIP pass to Audi Hospitality. Well, Christmas is just around the corner...