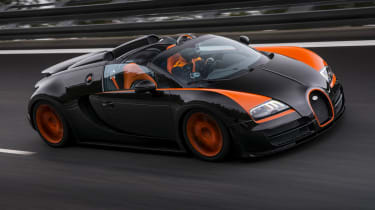 The Bugatti Veyron Vitesse is officially the fastest roadster in the world. The 1184bhp, open-top Grand Sport hit 408.84kph – or 254.04mph – at VW’s 12-mile bowl at Ehra-Lessien in Germany. The convertible is sold with a claimed 255mph top speed, and the German TUV organisation was there to officially verify the Vitesse can top 250mph uncovered.

Behind the Vitesse’s wheel was Chinese racing driver Anthony Liu, a 29-year-old who praised the Veyron’s comfort and stability at record-breaking speeds.

Bugatti’s Veyron Vitesse World Record Car will take pride of place on its 2013 Shanghai motor show stand, complete with a silver-penned scrawl on its kick plate celebrating its success.

The Vitesse wore a black and orange two-tone colour scheme. And those who feel their Veyron collection is too small can spend 1.99 million euros plus tax (around £2.1million) on a replica. Just eight Bugatti Veyron 16.4 Grand Sport Vitesse World Record Car Editions will be made, making it one of the model’s scarcer specials. And certainly the one with the longest name…

The Vitesse’s record takes some of the attention away from the 267.8mph Veyron Super Sport, which has been dropped of its Guinness World Record for fastest production car owing to models sold to the public being limited to 258mph. US rival Hennessey is looking to take advantage, its 1244bhp Venom GT topping 265mph last week and aiming for more than 275mph.