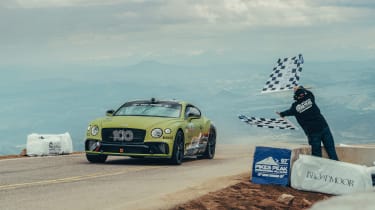 Bentley’s had a busy year since its breaking of the production SUV record at Colorado’s infamous Pikes Peak hill climb, but it hasn’t stopped it coming back in 2019 and doing it all over again, this time toppling the production car record with Rhys Millen once again at the wheel.

The record was set with the new Continental GT W12 sporting only light modifications such as a safety roll-cage and racing seats and harnesses. The still 2.2-ton GT completed the 5000ft climb into the clouds in just 10min 18.48sec, an 8.4sec improvement over the previous record. Do the maths and that means the GT completed the 12.4-mile course at an average speed of 70mph, an immensely impressive result considering the loose surface and sheer cliffs on the roadside all too ready to swallow up two-tons of lurid green Bentley.

> Click here for our review of the Bentley Continental GT V8

The previous record was set in 2014 by David Donner in a Porsche 911 Turbo S. Such is the rate of improvement in Bentley’s new Continental GT, Millen was able to smash this record with the help of its 626bhp twin-turbocharged W12 engine. Although one might be hard pressed to call the Continental GT a lithe sports car, its success at the Peak is a testament to how much the latest model has improved over the years.

The overall Pikes Peak record is currently held by Romaine Dumas, who piloted Volkswagen’s ID.R to a time of 7min 57.1sec, breaking not only the electric car record, but also the overall record in 2018.

The initial Continental GT W12 and recently driven V8 model will be joined by an even more powerful Speed model in future, possibly pushing power figures up closer to 700bhp to rival the Aston Martin DBS Superleggera and Ferrari 812 Superfast.

With this new generation of Bentley models still being rolled out over the next few years, don’t expect 2019 to be the last time Bentley aims its new product towards the sky in Colorado.