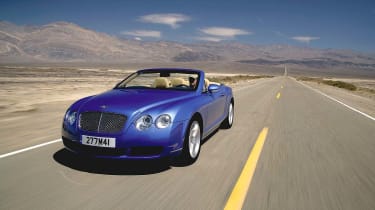 The sense of perspective was never going to make it. As our oil-black executive helicopter flew high over the Golden Gate Bridge and we looked out at the glinting glass peaks of downtown San Francisco, I sensed it unbuckle and fall away. By the time we’d touched down in Napa Valley, been ushered the few miles to St Helena in Flying Spurs and granted a full four hours to unpack the mandatory cream trousers for pre-dinner croquet on the exquisitely manicured championship lawns of the Meadowood estate, my grip on what normally constitutes a Wednesday afternoon had been prised free.

Our subsequent push deep into the savage heart of hedonism would have impressed Hunter S Thompson and progressed swiftly over the next two days and 700 miles. We wafted through the almost unimaginable majesty of the Yosemite National Park (mostly at a cheek-chewingly sedate 35mph), glided across the scorched earth of Death Valley (doused, the previous day, by a violent flash flood) and finished, perhaps inevitably, drinking a ‘modestly priced’ $150 bottle of Pinot Noir next to The Lake of Dreams at the Wynn hotel’s SW restaurant in Las Vegas.

But what did I expect? A quick strop round the back streets of Crewe, a tuna sandwich and a can of Tango? The lake of dreams is about right. If any Bentley deserves to float above the familiar machinery of the mundane, it’s the Continental GTC, because, frankly, this isn’t just the best car Bentley has made for a generation, it’s also the one that best defines Bentley in 2006, where the theatre is backed up by dynamic discipline and genuine talent. So while it might not quite match the Monte Carlo-grade glamour of the more expensive but aged Arnage-based Azure soft-top, its combination of aura and ability will give you goosebumps and is a long, long way from a bleak day in Blighty.

Aside from the obvious market draw (over 2000 US signatures in the order book already), there are compelling reasons why the conspicuous excess and vast, panoramic vistas of Northern California make a suitable location for the launch of the GTC.

First, Bentley’s new open 2+2 is truly a drop-dead drop-top, subtly muscular and athletic, especially with the hood up (important in a climate-aware state where even governor Schwarzenegger’s tan probably comes out of a bottle). Gone, almost miraculously, is the slightly unsettling Nissanesque dumpiness of the Conti GT, replaced by a perfectly balanced and achingly elegant form that looks more seminal than the coupe original.

Bentley’s design director Dirk van Braeckel explains why: ‘The sporting stance of the Continental GTC is unique and, with its compact soft-top and longer rear deck, quite different from that of the Continental GT coupe. And with the roof down, the exterior becomes a showcase for the hand-crafted interior.’ Amen.

Secondly, like that bottle of Pinot, this is a car at its best with space to breathe. The big skies, endless, laser-straight roads and breathtaking backdrops seem uniquely suited to the convertible Conti’s expansive all-wheel-drive, 12-cylinder personality and laidback, velvet-lined potency. But for the threat posed by radar-armed, handcuff-wielding officers of the law – on the road, in the air and hiding behind bushes – the GTC could really stretch its legs. But despite the temptation to hear someone actually say ‘Step away from the vee-hickle’, we’ll stick to the limit – a leisurely 65mph tops in California, 70 in Nevada.

And it’s easy. The topless Conti is powered by the same mighty 48-valve, 6-litre, twin-turbo W12 as the Conti coupe and saloon, and it develops the same 552bhp, with 479lb ft of torque from just 1600rpm, routed to all four wheels via a six-speed automatic transmission. It hauls 2495kg to 60mph in 4.8sec and on to a top speed of 195mph. Few cars on sale in America will get you from a standing start to the inside of a jail cell quicker.

But considerably fewer make the urge to floor it on six miles of die-straight tarmac easier to resist. True, the GTC will do 190mph with the hood down, but its greater talent, arguably, is the sublime ease and pleasure it brings to merely moving down the road, with deep bass burbling from its twin exhausts and barely more than a thousand revs registering on the left-hand dial, yet with enough torque available to pile on pace in a heartbeat.

The six-speed powertrain is so seamless and unstressed that the Bentley amasses speed without any apparent effort. Upshifts are noticed by the drop in pitch of the engine note rather than felt. Moreover, the GTC always seems to be in the right gear at the right time. Ease off the throttle and the transmission will slip up two ratios into the long sixth gear, revs falling back to a lazy throb.

The superb soft-fabric top, which incorporates a heated glass rear screen, is key to shifting the centre of interest away from outright performance. It’s a tour de force of design, style, packaging and refined engineering, as swift and unflashy in operation as it is solid and secure in place.

The weight penalty is just 110 kilos, yet Bentley claims class-leading torsional stiffness. Substantial cross bracing on the underside of the shell says they’re serious. So does ride comfort that’s easily the equal of the coupe’s and impressively free from any trace of shudder or perceptible flexing of the body when California’s peach-smooth roads just occasionally rough-up to resemble more typical British fare. Wind noise is vanishingly low too.

The wonderfully comfortable front seats have new sculpted backs that liberate an additional 30mm of knee-room in the rear, while the inner roof is trimmed with a high-quality fabric that’s claimed to look like the slung headliner in the original coachbuilt Bentleys. And although great attention has been lavished on the ‘jewellery’ in the cabin, using a mix of polished and satin metals, the Breitling clock in the centre of the facia is a model of tasteful understatement.

Luggage space drops from 370 litres in the coupe to a supermini-sized 235 litres with the roof down in the GTC, though Bentley still claims that you can carry skis and golf bags or travel bags simultaneously. To make this clearly crucial requirement possible, Bentley developed a new rear suspension layout to accommodate the packaging of the hood behind the rear seats. The rear damper units have been lowered by 210mm and are mounted to brand-new lower trapezoidal links.

With a slightly altered weight distribution, the GTC has revised air-spring pistons and damper hydraulics at the front and rear. Of the four driver-selectable damper settings, the softest provides quite stunning comfort, while the stiffest preserves more than reasonable suppleness while controlling body movement very well on the twisty roads through Yosemite. The bottom line is effortless cornering pace with rock-solid stability.

Like its hard-top stablemates, the GTC boasts the largest brake discs of any production car: 405mm at the front (36mm thick) and 335mm at the rear. Their colossal stopping power comes in useful as, finally, we pull onto The Strip in the entertainment capital of the world and, as is the custom for those with the right equipment, give it the lot.

For a few glorious, bellowing, stare-bending seconds at least, the Continental GTC bears its pearly whites. They like that in Vegas.