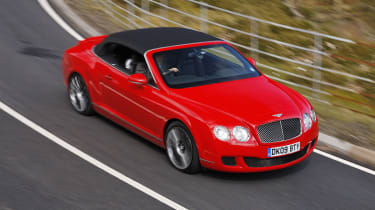 We rate the Bentley Continental GTC as one of the best convertibles money can buy. It’s hardly a lightweight and it’s not that hardcore, so you might wonder why we put it it so close to the top in our topless chart.

Well, it’s because the GTC is one of the most well-rounded and desirable convertibles out there. For a start it knows what its role in life is meant to be: a plush cruiser with the ability to hide a shocking turn of speed until it’s really needed. Plus the GTC is the ‘looker’ of the Continental range, thanks to the chopped-down side windows and the coach-built feel brought about by the beautifully engineered fabric hood. So the idea of a GTC in ‘Speed’ spec sounds like a rather good one.

Don’t underestimate the importance of the GTC model to Bentley either. Since its launch three years ago, 8700 have been sold around the world. In the UK the convertible makes up a third of all Conti sales, in the US nearly half. With the GTC costing around £13,000 more than the coupe, it’s easy to see what an important revenue earner the GTC is.

The Speed version adds a further £8600 to the list price, but then this extra money nets you the 600bhp engine upgrade (up 48bhp), 20in wheels, revised suspension (10mm lower at the front, 15mm at the rear), a sportier exhaust, a rear spoiler, revised ESP settings and a 15 per cent increase in peak torque, available from just 1700rpm all the way to 5600rpm. All this extra grunt gives the GTC Speed an official top speed of 200mph (or a stormy 195mph with the roof down) and a claimed 4.5sec dash to 60.

Pulling away from Bentley’s Crewe headquarters,  the first thing that strikes me is a more vocal exhaust grumble percolating through to the vault-like interior. You’d never guess you were in a convertible, though, as the roof looks permanently attached – there’s even an interior light in the centre of the headlining. With the revised ZF six-speed auto gearbox slurring its shifts nicely, you begin to wonder if the only perceptible benefit to ticking the ‘Speed’ option might be the slightly noisier exhaust, but find a deserted stretch of road and it doesn’t take long to discover that this car is properly quick, shockingly so at times, a feeling reinforced by the near unbreakable traction on offer. The front suspension subframe is solidly mounted on the latest GTC models and, combined with the more extreme Pirelli P Zeros on the Speed, turn-in is a lot sharper than before. The best way to sum-up how the car feels now is ‘fitter’ – from power delivery through to gearchanges in ‘Dynamic’ mode, each operation is that little bit sharper than before.

All the extra performance means the brakes get even more of a workout, though, and it doesn’t take long before the standard steel-disc set-up starts to wilt. The brilliant optional carbon discs really should be standard on the Speed, as a 200mph, 2.5-ton car needs all the help it can get when it comes to stopping.

I didn’t think I’d be that impressed with this version of GTC, but I was wrong – it’s one of the most accomplished convertibles out there. Bentley expects 50 per cent of GTC buyers to tick the ‘Speed’ box. I wouldn’t be surprised if it ends up being a lot more.