The 204mph, 621bhp Continental Supersports is a GT3 RS, Crewe-style 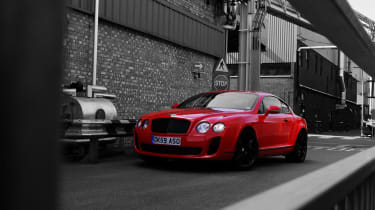 I don’t think I’ve ever been so surprised sitting in the passenger seat of a car. Actually, I’m finding it hard to recall ever having been so surprised full stop. The scene is a set of traffic lights in the Cheshire countryside, a few miles outside Crewe. To my right – on throttle, steering and brakes… but mostly throttle – is Bentley’s director of engineering Dr Ulrich ‘Ully’ Eichhorn. Ully’s right foot is exactly where he likes it to be these days: modulating the throttle of the newly massaged 6-litre twin-turbo W12 that has powered our Continental Supersports from Bentley’s Pym’s Lane factory to this point with what can only be described as mouth-dryingly brutal haste.

Eerily smooth and underscored by a subtly visceral infra-bass woofle, it’s one of those engines that sounds as if its idling torque is generating localised gravity distortions. It requires just 2000 revs to unlock all 590lb ft of it. Fully exercised, its 621bhp is the highest power figure Bentley has ever quoted for a road car and its standing-start times to 60 and 100mph (3.7 and 8.9sec) the lowest.

I know what you’re thinking. While we’ve been sat here at the lights shooting the breeze about biofuels (the Supersports’ engine can run on E85 ethanol or any mix of the plant-based biofuel and petrol), the real-world upshot of a well-to-wheel CO2 reduction of 70 per cent (taking emissions to below 120g/km), and what seems to be the very real possibility of there one day being an all-electric Bentley, a Ferrari 599 GTB Fiorano has sidled up alongside and its driver, seeing the shimmering stretch of traffic-free blacktop ahead, has given Ully the nod.

But, thank God, no. The lights in question are at a T-junction and we’re turning sharp right. The solid concrete base of the lights governing traffic flow from the right effectively makes a gateway to the road we want and it’s quite narrow. I expect Ully to ease the 2240 kilos of amply dimensioned, all-wheel-drive GT in his charge through the turn in a gentle arc, before reuniting the accelerator pedal with its end-stop in his customary fashion. But as the lights turn from orange to green, he simply floors it and winds on half a turn of lock.

The Supersports’ trajectory, to my astonishment, doesn’t scribe the shortest distance to the hedgerow on the far side of the road but the gentle arc I imagined, culminating with the inch-perfect insertion of the Bentley’s meaty flanks and stockier-than-standard rear track between the traffic-light base and the edge of the road. Only, by the time he straightens the wheel again, we’re doing 50mph and my neck feels as if it’s just been subjected to the most vicious move in the chiropractic handbook.

The point is well made and quite stunning. The list of things that separate the Continental Supersports from the already almost preternaturally capable and rapid GT Speed is comprehensive and eye-catching. It includes doing away with the rear seats, replacing the plump front armchairs with lean (but still remarkably comfortable) carbon-shelled buckets, and a host of other detail weight-saving measures – even down to reducing the cabin’s cow-hide count with liberal applications of Alcantara – that together slice a worthwhile 110kg chunk from the tally at the kerb. The upgrades to engine, transmission, cooling and brakes are similarly thorough and harmonious. Larger front ducts feed more air to the intercoolers, which, along with tweaked boost pressure and an ECU remap, contribute to the 21bhp hike in power and additional 37lb ft of torque. The four-wheel-drive, meanwhile, has gained a new rearward bias, and the latest ZF six-speed auto, which has a completely new hydraulic system, shifts gear twice as quickly as its predecessor and, on downshifts, can jump ratios when you’re really leaning on the colossal 420mm carbon-ceramic discs.

But the thing that matters most, the thing that really sets the Supersports apart and justifies the efforts to move the Conti GT’s game onto a whole new level via the unofficial ‘skunk works’ meetings in the living room of Ully’s house a couple of miles down the road, is the way it deploys its power and handles.

There’s a decent straight ahead and Ully does the right thing. The Supersports kicks away as savagely as I’d hoped it would given its prodigious outputs, but it’s the way the transmission sustains the surge that astounds. Ully commentates: ‘You can hear that the shifts are not only a lot quicker, but feel how the car is accelerating through them. In contrast to automatic manuals, we don’t have to separate the drive and re-apply it after. With this we shut off the ignition and the injection through the shift. The engine’s inertia takes it down from 6500 to 4500rpm. That still drives the car through the shift, so we get uninterrupted acceleration.’ At the end of the straight, what Ully describes as ‘a nice little speed’ is wiped away like raindrops from a windscreen by those monster brakes.

Ully switches out of the chassis’ ‘Sport 1’ setting and the suspension relaxes a little. There are four settings in all – Comfort, Normal, Sport 1 and Sport 2 – each one ‘driveable and not to show how hard or soft the suspension will go,’ says Ully, though Sport 2 is best left for the track.

I ask how the chassis modifications evolved. ‘We started with the 40:60 torque split differential we had tried in the past,’ Ully explains. ‘Then the chassis boys came up with some new bushings they had found too harsh on other cars and thought maybe we could go a bit more extreme still. So it all started coming together. Everybody was doing their own thing and it developed its own momentum. Our guy who does the ESP tuning came up with a setting that allows you to stay on the gas most of the time – it doesn’t throttle the engine back, it only brake-steers the car for you.

‘Each of these, when we tried them in isolation, felt quite good – small improvements. But it was a real wow effect when we put them all together. It was something that was much more than the sum of its parts. And that’s when we started getting some other people into the car. Dr Paefgen [Bentley’s CEO] and the marketing people immediately latched onto it and said, “Hey, there’s a market for this.”’

It didn’t hurt that, at the time, two-thirds of all Conti GTs being sold were Speeds. Or that the chassis changes gave the Supersports such transparently obvious advantages for enthusiastic drivers. With perfect timing, the big Bentley’s bluff nose rushes at another series of S-bends. Ully doesn’t lift; if anything, he dials in a little more pace. The Supersports turns in with undiminished conviction and tacks neutrally from apex to apex, smoothly vectoring the G-forces from side to side. There’s hardly any body roll, and barely believable levels of grip.

Ully explains what just happened: ‘First of all we set-up the chassis to be a little more neutral than the Speed’s, so we get a very neutral stance mid-corner. Then the 40:60 diff helps to control both attitude and position when you’re trying to throttle-steer the car. Also, when you’re accelerating out of a corner, the diff and wider track at the rear helps the car, turning it in. So when you roll on the gas what it does is actually tighten the line slightly. The ESP also helps in that. We programmed it so that while you’re still on the gas it knows you want to go faster and you’re not really in trouble, so it just uses the brakes to adjust the attitude of the car. If things get too bad it stops that philosophy and does something else. It will always bail you out – within the limits of physics, of course.’

As we burble back to the factory there’s just time to appreciate the other side of the Supersport’s character: the comfort and refinement that allows it to strut its true continent-traversing GT credentials. It’s been a brief introduction but one that’s left a big impression. It's a shame we never encountered that Ferrari.

Driving the SupersportsWe had to wait another couple of weeks before we could actually drive the Supersports, and after a couple of flights I find myself some way away from Crewe, in Seville.

The first few miles behind the wheel are encouraging. The steering isn’t brimming with feedback, but it has a clarity and directness with absolutely no slop. Each turn is met with instant reaction from the chassis too – grip is monstrous but there’s also an agility to the way the direction changes through mini roundabouts are dispatched. The numerous speed bumps prove that it still rides well too.

The orange-growing city is at the bottom-left corner of Spain and as we head out towards the border with Portugal the roads are fantastic. Smooth, fast, wide, well sighted and absolutely perfect for the Supersports to show off its phenomenal ability to cover ground. Just out of interest I stop and execute a full-bore standing start on a long straight, after which I’m more certain than ever that a sub-4sec 0-60 time is feasible. The throttle, like the steering, is a more sensitive thing than in a GT Speed – curl your toes and you’ll add another 50mph before you know it. The brake pedal, however, could do with a bit more resistance, feel and progression.

So far the Supersports has felt like a GT Speed but more taut and honed, which is good, great even. But with a 40:60 torque split and bucket seats I’m expecting more, and after a while it becomes obvious I’m not going to get it. You turn in, get back on the power and drive out with huge grip and monstrous velocity. But that’s really the only option. Adjustability is marginal. You drive it up to a point but no further. You won’t be managing understeer, lifting slightly, then unleashing the W12 so that you can hold a nice bit of four-wheel-drive power oversteer out of a corner. And you always leave a healthy margin on turn-in because there’s the sense that if you carry too much momentum it’s not going to be inches that you slide wide by.

The track we go to later exposes even more ruthlessly the physics of a 2240kg car with a whacking great engine slung ahead of the front axle. It would have been nice if the Supersports could have taken on the 599 or even shown itself to be a gentrified GT-R. But while it can cover ground in phenomenal fashion, it’s enjoyably impressive rather than fun and involving. Henry Catchpole