The Mulsanne is Bentley's all-new flagship, but is it a worthy replacement for the Arnage? 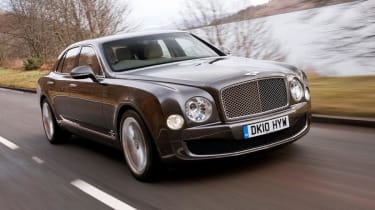 So what is it?

The Mulsanne is Bentley’s new £220,000 flagship, replacing the ancient (but much loved) Bentley Arnage, which finally went out of production a few weeks ago. The Mulsanne will be built at Crewe and deliveries will start this September.

Bentley have stuck with the traditional 6.75-litre V8 engine but brought it bang up to date with loads of modifications including an all new crankshaft, pistons, cams with variable phasing and variable displacement (achieved by closing the valves on four of the eight cylinders for maximum fuel economy when cruising).

The result is even smoother running, a 15 per cent reduction in fuel consumption (every little helps…) and a monstrous 505bhp at 4200rpm and gargantuan 752lb ft of torque at just 1750rpm.

For a car that weighs in at hefty 2585kg; very good. Bentley didn’t want to make it any lighter as it felt that would have spoilt the driving experience, which is a strange thing to hear from a car company these days. Apart from the stiffness of the bodyshell (offering much better suspension control), the biggest change has to be the adoption of a new eight speed ZF gearbox that is so good at swapping cogs it’s next to impossible to spot when they happen. You’ll soon get done for speeding, though, as this thing flies. 0-100mph in 11.6secs isn’t hanging about, nor is a top speed in excess of 186mph but it’s the way the engine is only turning over at 1500rpm at 70mph that best illustrates the sheer effortlessness of this car.

The obvious rival to the Mulsanne is the Roll Royce Ghost, which is equally as quick, just as expensive but isn’t nearly as driver focussed as the big Bentley. The Mulsanne is helped massively by the fact is comes equipped with much sportier tyres (optional 265/40 ZR21 were fitted to our test car) than the Rolls, which really help the handling when pressing on.

One of the big drawbacks to the Arnage was that the seating position wasn’t very adjustable (especially if you were taller than average) so you often had to put up with a compromised driving position. The new Mulanne corrects all of this so you can now sit much lower in the car and enjoy much more legroom than the Arnage offered. It’s amazing what a difference this better seating arrangement makes to the driving experience.

Overall, the new Mulsanne is a great improvement on what went before. It’s more rewarding to drive quickly, beautifully built from the very best materials and a worthy flagship for Bentley. My only worry is whether it looks different enough from what went before. I can see it’ll appeal to previous Bentley owners, but will it bring in new customers to the brand? Only time will tell.