We drive the new BMW 1-series M Coupe. With a 340bhp straight six, is it the E30 M3 reborn? Review, pictures and video 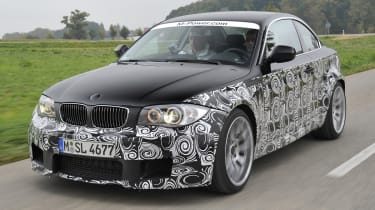 It looks the bizzo in the flesh – it has that inimitable M-car stance down-to-a-tee. The entire rear suspension has been lifted from the E92 M3, so the car is now 80mm wider out back. The front track has been increased too, and wider rubber has been fitted all round.

There is no high-revving straight-six here, though. Instead it’s a modified version of the twin-turbo 3-litre six that sits in the Z4 35i. Power is 335bhp and 369lb ft of torque, just a bit more torque than said Z4. The car weighs around 1500kg.

A proper M-car. And that’s despite the pathetic 6500rpm red line. The first time that engine sweeps through 6000rpm and then doesn’t want to spin much further you feel pretty disappointed, but that’s because you didn’t concentrate on the sheer speed with which it zinged from 1500rpm to that point. This is a different kind of M-performance than the E90 and E92 M3 – surging, useable and very, very effective.

The chassis is pure, proper M-car, too: firm but well damped and dominated by that rear axle and locking differential. And it’s very, very agile. The steering rack is standard 135i, but the altered kinematics seem to make it feel faster between turns, but not unnecessarily quick like the current M3.

In everyday driving, this thing might have the legs on a BMW M3 – its roll-on acceleration is exceptional.

The BMW 1-series M Coupé has now been replaced by the BMW M2. The new car's production hasn't been limited like the 1-series M Coupé, but offers a lightly more sophiticsted chassis and predicatable engine. However, don't it feels no more gorwn-up.

The 1M has held its value exceptionally well. They were aproximately £40,000 when new and they still cost about the same to buy second hand.