The BMW 1-series is about to go through big changes, not least its move to FWD 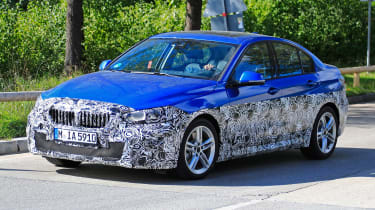 This is the BMW 1-series saloon, a model only currently available in China that will soon be reaching the UK and Europe to rival other small premium saloons like the Audi A3 saloon and new Mercedes A-class saloon.

The BMW 1-series hatch has always held a big USP in the compact premium class, that is its steadfast adherence to a rear-wheel-drive platform. Despite the practical compromise of the rear-drive platform, namely stingy interior and boot space, the ability to steer a simple hatchback on the throttle has always been a core factor of our admiration.

> Click here for our review of the new BMW Z4 Roadster

But this saloon, like the hatch it will eventually spawn next year, will instead adopt the front-wheel-drive UKL platform already seen underneath the new Mini and BMW X1/2, bringing with it both new pros, and cons.

Space is likely to be a big improvement in the new 1-series, as the engine will now sit in a transverse mounting, allowing BMW’s packaging engineers to push the windscreen and dash forward to unlock more space in the cabin. As high-spec versions of the new 1-series (including an M Performance flagship) will feature all-wheel drive, the rear seats will still have to deal with a raised transmission tunnel, but the new layout will at least ensure the new 1-series is more on par with rivals for space and practicality.

The new platform will also have an effect on the engines, as BMW’s turbocharged straight-six units that are currently fitted to the M140i will no longer fit, making the next 1-series a four-cylinder (or smaller) only proposition.

This has other effects, too, as the next 2-series coupe and convertible are also due for a shake-up, likely being converted over to front-wheel drive, if they come back at all. As a result, the next M2 (if there is indeed another one) is also likely to be a very different proposition, losing its thuggish rear-wheel-drive demeanour.

BMW no doubt has plans in store to appease fans of its small M-car range, and as the Mercedes-AMG A45 has previously proven, there is plenty of admiration, and sales, to be gained by developing extreme hot hatches, but we’ll be sad nonetheless to see the small rear-driven BMW disappear (Z4 aside) from BMW’s range.