All are respectable performers, with the M235i naturally strongest – though it’s not a particularly enjoyable engine 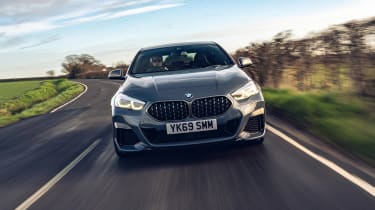 The model at the bottom of the price sheets is also slowest off the line, though the days of ten-second-plus 0-62mph times are long behind us, with the 218i Gran Coupe scrabbling there in 8.7sec. Top speed is 133mph, which in turn is 6mph behind the 220d. The diesel also manages to hit 62mph from rest in a respectable 7.5sec – hot hatchback pace once upon a time.

If you’re looking for a 0-62mph benchmark in the 2-series Gran Coupe range then you can add a figure of 4.9sec to your mental filing cabinet for the M235i, with the usual electronically limited top speed of 155mph.

So far we’ve been able to sample both the petrol models, the 218i as an automatic. It’s fair to say the 218i isn’t the most vivid accelerator, happily matching the pace of traffic but becoming vocal if you wish to push any harder. 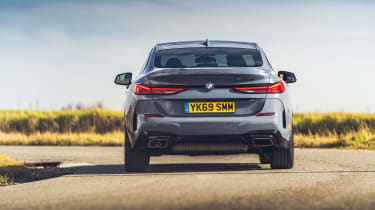 At low throttle inputs it’s as refined as any three, but revving it harder isn’t as enjoyable as it is in say, a three-cylinder supermini, with the 2-series carrying perhaps a little too much weight for the 1.5 to feel lively. The three-pod’s dual-clutch transmission comes without paddles too, so if you want to swap cogs yourself, you’ll have to work the stubby selector lever – or have bought the manual.

The M235i is actually similarly refined to the entry car when you’re cruising, but delivers a more satisfying surge and better throttle response. The eight-speed ’box is smooth and quick, and you get paddles now too, but as we’ve discovered from the M135i, that’s about the extent of enjoyment you’ll get from this engine.

The 2-litre is smooth, but the power delivery is so linear and the torque band so wide there’s little to be gained from venturing into the upper third of the rev counter, and that’s even if the digitised drone at higher revs doesn’t put you off. The numbers make the M135i a performance car, but the experience doesn’t.