Far from pretty even by recent BMW standards, but some may like the quirkier elements 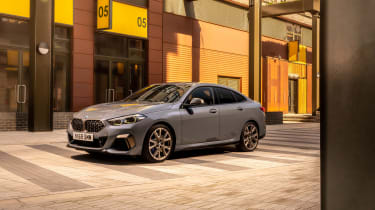 BMW says it’s deliberately steered away from a ‘traditional BMW sedan shape’ with the 2-series, and wanted something to make people think. Whether this strategy works for the car, or for BMW as a whole long term remains to be seen, but given every other BMW saloon in history looks better to our eyes than the 2-series Gran Coupe, perhaps something a little more traditional wouldn’t have been such a bad move.

Some may find merit in individual details, and a proportion of buyers will surely be less concerned about the shape than the badge on the bonnet, or enjoy the aggressive image the enormous conjoined kidneys project.

It’s just not a great shape though, with poor proportions, a piggy nose and sagging X4-style bootlid, and an expanse of metal over the front and rear wheels that serves to make even the 18-inch units on the M235i look tiny.

BMW does at least offer some interesting paint shades on the 2-series, but ironically this is exactly the kind of car you’d want to order in black or silver, as standout shades such as Misano Blue, which looks decent on say, the Z4, only serve to highlight the car’s awkward lines.