Composed, comfortable and quick, but the 2-series Gran Coupe is short on dynamic flair 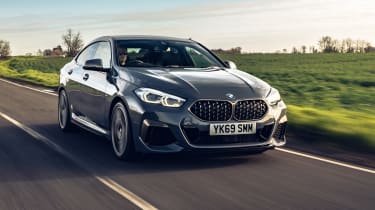 If SUVs and crossovers have been the biggest automotive craze of recent years, then four-door coupes have to be a close second. What began with cars such as the Mercedes-Benz CLS and Volkswagen Passat CC has expanded across the market, suffixed with badges such as ‘coupe’ and ‘fastback’.

BMW’s suffix of choice is Gran Coupe, and after appearing on 4-series, 6-series and 8-series models, it’s now appended to the 2-series too. With no proper coupe model of the 1-series planned, this is the sleekest the new front-wheel-drive-based car is likely to get, and comes with a modest range of engines, from a turbocharged three-cylinder through a four-pot diesel and on to the range-topping M235i xDrive.

> 2019 BMW M8 Competition review - has BMW beaten Aston Martin at its own game?

Until now we’ve been most familiar with the sportiest version of the 1-series, the M135i, and in all but shape the M235i is largely the same. Unfortunately, that means it falls short of our expectations, for while it’s undoubtedly a fast and capable car, it’s not as entertaining as rivals, nor feels as special as the old six-cylinder, rear-drive models.

Plenty of customers will doubtless be happy with their 2-series purchases, but where once you could make a case for the smallest BMWs offering something no other rival did, the latest car gives you little reason to choose it over a Mercedes-Benz CLA. 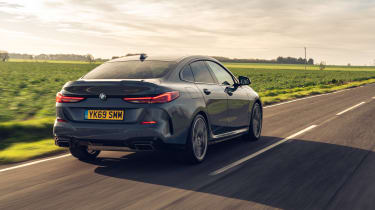 Standard equipment in Sport includes 17-inch alloy wheels, cloth upholstery for the sports seats, cruise control, a sport bodykit and parking sensors, among other touches. M Sport steps up to 18-inch alloy wheels and a more aggressive body styling package, a 10.25-inch touchscreen display to the Sport’s 8.8-inch screen, leather trim, dedicated steering and suspension settings, and heated seats. If you opt for the manual with the 218i, there’s also a special gearknob and shorter shift action. 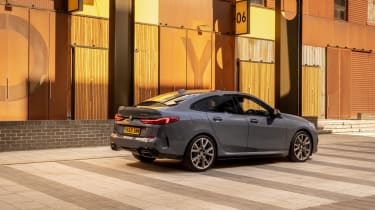 Most relevant market comparison is with Mercedes’ recently launched second-generation CLA. The entry point is higher, with a CLA180 starting at £28,690, but that does net AMG Line trim and a standard automatic gearbox, with similar performance to the 218i Gran Coupe.

Similarly, at the upper end of the CLA range you’ll find the M235i equivalent, the CLA35. Pricing here begins at £39,320, a little more than for the BMW, though for us there’s no contest – the CLA is more fun to drive than the BMW, has a more innovative and appealing cabin (if not quite as well constructed), and more elegant styling to boot.