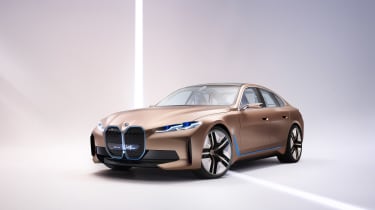 BMW has unveiled the i4 Concept, an all-electric model that is a look ahead at its incoming i4 electric car that will rival the Tesla Model 3. Far from being a bespoke carbonfibre-constructed model in the same vein as the i3 and i8, the i4 Concept instead points towards a production model that will share its underlying platform and body with the next 4-series Gran Coupe, as such geared for higher volume and a bigger profit margin.

The i4 Concept shares much of its aesthetic with the 4-series Coupe concept from the 2019 Frankfurt motor show, sharing similar elements around the headlights, tail, and yes, that controversial grille. Despite its concept car billing, the i4’s body-in-white appears to be near-production specification. There are still plenty of concept car details though, such as the wing mirrors, lighting units and rear bootlid, bumper and tail light configuration. 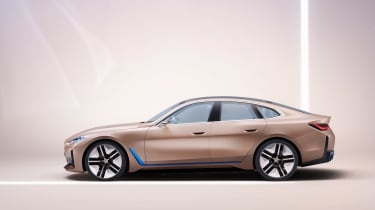 Under the skin, BMW has confirmed the i4 Concept will be powered by a 523bhp electric motor, being able to whip the i4 to 62mph in about four seconds and on to over 124mph. The i4 Concept’s battery pack is unique to BMW, and packs a big 80kWh capacity into the i4’s relatively compact body. With such a big battery pack, BMW estimates it will reach up to 373 miles on a WLTP cycle – substantially more than most electric vehicles of its size, including the Tesla Model 3.

The penalty of such a large battery is its 500kg estimated weight, which even when taking into account the lack of an internal combustion engine and transmission system will likely make the concept, and its production variant should it share such a big battery pack, significantly heavier than a standard 4-series Gran Coupe. 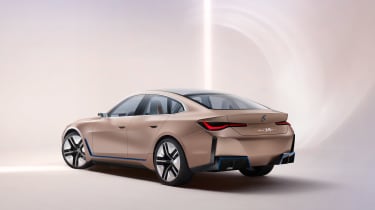 The i4 Concept also looks ahead to BMW’s next-generation interior and infotainment system. Now situated in a single subtly curved unit are two displays that spread from the driver across and beyond the dashboard centrepoint. The interior is both familiar to other BMW models such as the current 3-series, and the layout Mercedes pioneered on its current S-class. Although this is a concept, it’s clear the scroll wheel that Mercedes has now ditched, remains here, pointing towards BMW’s next-generation infotainment system retaining its classic input method when the new system goes into its first production model next year.

The i4 is due for production next year on the same line as other BMW models, but due to the packaging requirements of its battery pack and electric drivetrain it will require substantial modifications to the CLAR architecture it’ll share with the 4-series and its other derivatives

The iX3 crossover is the first model in BMW’s fresh line of all-electric offerings, and production is now underway at its Chinese facility
BMW M Performance parts: pricing, availability and range

You can add some sporting flare to your BMW with the BMW M Performance parts range. Here’s the lowdown...
This BMW M8 Competition is faster than a McLaren P1

Manhart Performance has lifted the BMW M8 Competition to 812bhp, and the results are rather impressive