The iX3 crossover is the first model in BMW’s fresh line of all-electric offerings, and UK pricing and specifications have now been announced 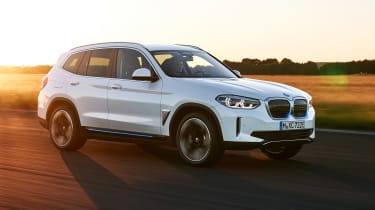 BMW revealed its all-new, all-electric iX3 SUV earlier this year, marking a shift in its electrification strategy with a new line of all-electric models. Production is on track to begin at its Chinese facility later this year, with first UK cars set to hit the road in summer 2021.

Though BMW has been producing the all-electric i3 since 2013, the iX3 signals further integration of fully electrified powertrains into its model range – the X3 is now its first model available in pure-electric, plug-in hybrid and internal combustion forms.

Sporting the marque’s fifth-generation eDrive tech, the iX3’s powertrain sees a 30 per cent increase in power density compared to its use in existing EVs – this is thanks to the use of a more efficient motor, a more power-dense battery, and the integration of the motor, transmission and associated electronic gubbins in a single housing. 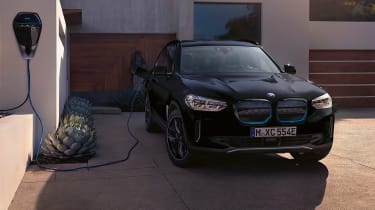 At the rear sits a single current-excited synchronous motor (eliminating the use of rare earth materials), sending 282bhp and 295lb ft of torque to the rear wheels; 0-62mph is said to come in 6.8sec, with top speed at 112mph. BMW also claims this power is accessible at higher revs than is the case with traditional electric motors, which could make for better response at speed. There’s no word on whether we’ll receive a more potent variant. However, the addition of a motor at the front would make for both all-wheel drive and a combined output of 564bhp and 590lb ft of torque.

The reduction in size of the powertrain has allowed BMW to lower the centre of gravity by 7.5cm over that of an internal combustion X3, with trick ‘actuator contiguous wheel slip limitation’ tech making rear-wheel drive more manageable in adverse conditions. In order to make space for the motor, the iX3 also sees the inclusion of a bespoke rear axle subframe, with electronically controlled dampers coming as standard – adaptive M suspension can also be had at a cost.

Unlike in the i3, BMW will allow drivers to adjust the strength of regenerative braking; high, medium or low can be chosen, with the highest setting allowing for one-pedal driving. The iX3 can also automatically adjust its strength depending on the road situations, using navigation data and/or the driver assistance system sensors should you desire.

Under the passenger compartment is a 74kWh battery (80kWh gross), boasting improved power density for a reduction in weight and size over an ordinary unit of the same capacity. Thanks to developments in efficiency, the iX3 claims a range of 285 miles on the WLTP test cycle, 26 more than the 259 miles of the Mercedes-Benz EQC.

BMW has also included a new charging unit in the iX3, allowing drivers to go from 0 to 80 per cent charge in only 34 minutes on a 150kW rapid charger, or gather 62 miles of juice in only ten minutes. The iX3 will also support up to 11kW charging on a standard AC outlet. 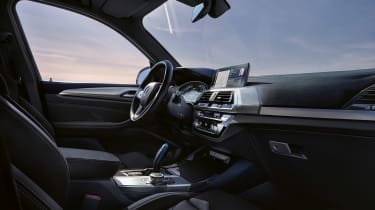 Overall design is similar to that of a standard internal combustion X3. However, look closely and you’ll notice the use of components designed to increase aerodynamic efficiency and maximise range. As there’s a reduced need for cooling, front intakes and BMW’s trademark kidney grilles are closed off, with the rear also designed to increase efficiency. Even the wheels are designed with aerodynamics in mind, with their unique design said to add around six miles of range – all of this contributes to a drag coefficient (Cd) of 0.29. Of course, no BMW i product would be complete without blue highlights, and so the iX3 receives them both inside and out.

Inside, you receive a 12.3-inch screen behind the steering wheel alongside a 10.25-inch infotainment display as standard, with BMW’s latest operating system now designed to accept over-the-air updates. The marque has also worked with the world-famous composer Hans Zimmer to design new sounds for start-up, shutdown and different driving states.