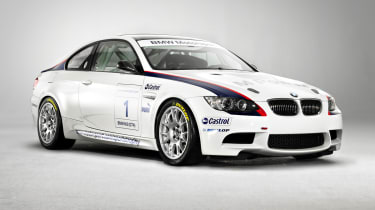 BMW is making another hardcore M3 coupe. The Competition Package will be launched in March and will doubtless be seen as a modern-day M3 CSL by many people. And we’re inclined to count ourselves among them – there are a number of dynamic tweaks that should make this sharper and more dynamic than the regular V8-engined E92 M3, and a much more dynamically-honed car than the recent M3 Edition. There’s a 10mm suspension drop and new electronic damper control, the combination of which ‘improves upon the standard car’s already agile handling making for a more exciting and dynamic drive’, according to BMW sources. Sounds like grand news to us. As does improved stability control, which we’d expect to make the rear-drive M3 even more playful when in Competition spec. Sadly the engine will be untouched, with power, torque and acceleration identical to those of the regular 4-litre M3 two-door. That means 414bhp (at a heady 8300rpm) and 295lb ft of torque alongside a 4.8sec sprint to 60mph and a limited 155mph top speed. There aren’t any pictures of the new car just yet, it being based on the refreshed M3 that’s still due to be revealed. We’ve been told there’s a new, lighter set of 19in alloy wheels, which BMW says are inspired by the E46 CSL, while some subtle aerodynamic adornments are expected. Specifying a Competition Package M3 will add £3315 to the Coupe’s price, the regular car costing £52,730. That means a £56K M3. The E46 CSL cost £58K when new, but justified its near-911 price tag with upped performance and significant weight shedding. We’ll see if the M3 CP can win us over too when it gets its likely Geneva motor show unveil in March. What do you think? Should BMW just give in and make us a new CSL? Or is the combination of Competition Package and supercar-like M3 GTS enough? The Forum’s the place to tell us…