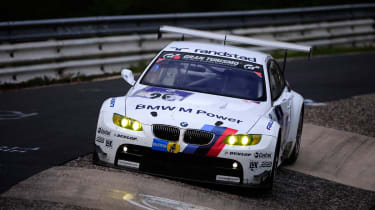 BMW has confirmed it will be placing an entry into the 2012 DTM championship, after much speculation. After eighteen years away from Germany’s premier tin-top race series, it has have confirmed a racer based on its M3 sports saloon will be used in 2012.  It comes after an initial signal of intent in April was followed by a summer of negotiations with Audi, Mercedes and the DTM chiefs over new regulations intended for the series. Dr Klaus Dreager, BMW AG board member, spoke of BMW ‘returning to its roots’.  This hopefully means success will filter back to the road cars.

Full BMW M3 picture gallery Many have worried for the future of M Division as the direction of its engines become turbocharged and models such as the X5 and X6 get the M treatment. Hopefully a return to the DTM will correspond with some fantastic new M cars. Let’s not forget, of course, that the E30 M3 was produced to homologate for motorsport…

Draeger also mentioned that the DTM would be ‘the perfect place to demonstrate the impressive sporting characteristics of our vehicles against our core competitors’. One man clearly keen on this idea is DTM boss Hans Werner Aufrecht, who has said ‘I am personally looking forward to again seeing the three premium brands of Audi, BMW and Mercedes-Benz competing against each other on the race track’.

BMW has a successful DTM past, with the M3 picking up titles in 1987 and '89 courtesy of Eric van de Poele and Roberto Ravaglia, while the 635 CSI of Volker Stryeck. And the current M3's appearance in DTM will follow the car's sensational win at the 2010 Nurburgring 24-hour race.