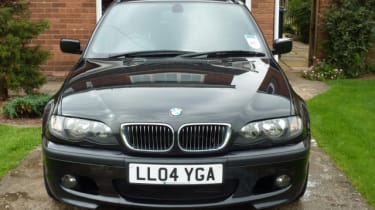 I had to buy a car to stay sane. These days I have a 130-mile commute three days a week that’s half motorway, half cross-country. A few times I’d borrowed Mrs B’s SEAT Leon diesel and found it fantastically economical but, oh boy, was it dull. And noisy. The family Ford S-Max was a sweeter, six-speed diesel experience but it’s a big thing and you can feel it if you push on a bit. I needed a car for the job, budget circa £7500.  Of course, car hunting is as much fun as the actual purchase. At first I thought I wanted a little Skoda Fabia VRS; discreet, punchy, frugal. We’re talking the last generation model, of course. Then it looked like there might be occasional family use. Hmm. Octavia VRS, estate? Nah; not focussed enough. I then considered lease hire up to £300 a month but couldn’t find anything that interested me, apart from a brand new MX-5 2.0 Sport at £189 per month… So it was back to the classifieds.

The last-gen RenaultSport Megane dCi 175 stacked up rather well. It’s a four-pot, yes, but smooth, quiet and nicely gutsy, and there’s a five-door version. The cooking models with the bustle back look a bit dated but the RS looks neat with its arch-filling alloys, especially in black. Then I saw a 330d Touring and wondered why I hadn’t considered it before. It was the first diesel ever at eCOTY and back in 2000 its refined straight-six turbo-diesel had 184bhp and five manual gears. Yes, I know the 320d is quite something but, frankly, it’s two cylinders down.  The hunt began in earnest. The Megane was rarer and offered a newer car and lower miles for the same budget but… A month after my search began, I realised that I wanted a late model 330D Sport, and that I’d found the right car – black, the later 204bhp with six-speed manual, Alcantara trim, 95k-miles and a price of £5500. I rang to arrange a viewing. It sold the day after. Damn.  At first I wasn’t fussed if it was a Sport, until I realised that that was the only way to get the Alcantara interior. Plain cloth looks low rent, leather looks shiny and cold, and I definitely didn’t want wood. It had to be manual, too – it’s not only more engaging but makes the car faster, more economical and lasts better.  Weeks after missing out on that first Sport I handed over £5800 for a near-identical car with 125k-miles on the clock. Thank you, Pete in Shrewsbury. Next time I’ll let you know how it drives and what Q, my Capri-fettler, reckons to it when it’s been up on the hoist…