I'm really enjoying the 330d. Considering the mega mileage it's surprisingly together and it's made my long commute a much more enjoyable, relaxed and refined experience. Just as I'd hoped, then, though as I'd anticipated, the 18in rims and 40 section tyres made the ride a bit more harsh than it needs to be and there's a bit of tram-lining (as much due to the high-mileage bushes as the wide tread, I'm sure). But the 330d looks so much better as the Sport, on the 'MV2' rims, and I love the part-Alcantara sports seats that come with it; they really comfortable and supportive and fit in perfectly with the dark interior with its carbon-pattern black metal trim.  There has been one significant disappointment, however. One of the main reasons for opting for the 3-litre straight-six over the very frugal 2-litre 4-pot – apart from its extra power and torque and smooth, classy growl – was that it's still supposed to return over 40mpg with a little care. (The 330d manual is rated at a decent 182g/km compared to 227g/km for the auto). However, the trip computer suggested that the first tankful wasn't going to manage anything like that, even though I adopted a very light footed approach at the half tank point. It racked up 525 miles before the fill up, at which point the trip computer said 36.8mpg. Hmm. This bothered me for a couple of days, so I dug out the receipt and did the calculation myself. I have named my pessimistic computer  Marvin, because 525miles divided by 58 litres equals 41mpg.  I also have a solution for the firm ride, too. Well, a temporary one. Buying a rear-drive BMW just as winter blows in was less sensible than going for the front-drive RenaultSport Megane but I had already decided whatever I bought would soon be on winter tyres. Having put together evo's 2011 winter tyre test I am now totally convinced of their worth because they're highly effective in cold, wet conditions as well as snow. I wasn't convinced that fitting replacements for the low profile tyres on the 18s was a good idea, though, and set about acquiring a set of OE 17in alloys on eBay. I finally bagged a scruffy but straight set for £67, to which I will soon mount four of our test-winning Continental ContiWinterContact TS 830Ps in 225/45 size. 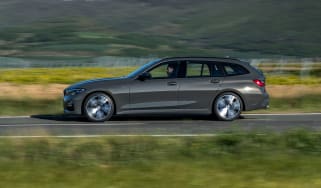