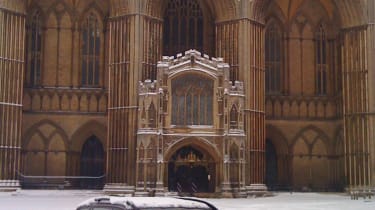 I've had the 330d for three months now and realised with some surprise that I've racked up over 6000miles. Not only that, more than 4000 of those have been on winter tyres. I knew when I bought the BMW that it wouldn't be prudent to run it on summer tyres on my regular 65-mile, cross-country commute, and although there have been only a few days of snow I have been glad of them. This morning was the first in two months that I've set off with the gauge reading more than 3deg C; most mornings at 6am it has been negative, and I've really valued the confidence that the Contis give. Oddly enough, the car feels good generally, as if everything's a bit tighter when it's chilled, though the old girl does chug a bit for a second or two starting from minus 10deg C.

Like many people who have invested in a set of winter tyres, I've been looking forward to snow, and when it finally, properly arrived – half a foot in one evening – I was astounded by how well the 330d coped. It was the evening of evo designer Langy's 40th and I was the designated driver. The BMW went everywhere effortlessly, collecting and dropping off; the traction control light didn't even flicker! Even clogging the throttle with the DSC off it was hard to get the car out of shape but the most impressive moment was climbing the last hill before home. It was about 1am and this three-lane section of the A605 had clearly seen lots of action – the snow was criss-crossed like Clapham Junction and there was a truck still stuck on the inside lane. I aimed a straight line right up the middle and at 45mph the 330d went up with barely a hint of slip. Brilliant.

Winter tyres don't like warm damp roads, though, and that's what we'll have for a little while according to the forecast. It's still possible to flow along at a fair old pace, which is what I mostly do, so I'm not tempted to consider changing them yet, especially as their narrower dimensions and the smaller rims have improved the ride quality.

Just before Christmas it passed its MoT without a problem and Qprep carried out the 'major' service and changed the brake fluid. The car feels like it will go on and on, which is good, because that's the plan!