The new BMW M3 saloon and BMW M4 coupe have been unveiled at the Detroit motor show. Pictures, UK prices and specs here 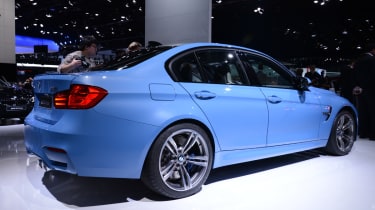 The new BMW M3 saloon and BMW M4 coupe have both been unveiled in full for the first time, at the Detroit motor show. Replacing the old E92-generation M3 saloon and coupe with two separate model lines, they will go on sale in the UK in June 2014, priced marginally higher than before, starting at £56,175 for the M3, the more glamorous M4 commanding an extra £468.

We’ve already been briefed on much of the new cars’ technology (tech rundown here) but there are plenty of nuggets that have been reserved for this final reveal. The 3-litre twin-turbo six-cylinder engine produces 425bhp and 406lb ft, figures up on what we were first told. The former arrives at, my M standards, a lowly 5390rpm, but happily it remains until 7000rpm, 600 revs shy of the engine’s limit.

Early fears of a twin-clutch takeover are abated by a standard six-speed manual gearbox, which weighs 12kg less than its E92 equivalent and comes with automatic throttle-blipping on downshifts to help fight its cause against the optional automatic. Around eight out of ten E92 M3s were sold with DCT, though, and that figure could rise thanks to even more tech bestowed upon the seven-speed transmission. There’s Launch Control as well as the amusingly named Smokey Burnout mode, which allows a degree of wheelspin at low speeds. Stability Clutch Control opens the clutch up when understeer is sensed, tightening the car’s line via a controlled clutch-kick effect.

As we’ve previously reported, there’s an electronically controlled limited-slip differential, while the electric power steering and Adaptive M Suspension (standard on UK cars) are adjustable between Comfort, Sport and Sport+ modes. Carbon ceramic brakes are optional. Optional technology includes a head-up display, while a free laptimer app for smartphones connects up to the car’s iDrive.

BMW claims weight savings of over 80kg compared the cars’ predecessors, the M4 the lighter of the pair at 1497kg, down from 1580kg for the M3 coupe. The cuts are aided by use of aluminium for the bonnet and suspension components and carbonfibre-reinforced plastic (CFRP) for the drive shaft and the roof, the latter applied to both body styles for the first time.

While M division’s head of engineering Albert Biermann previously told us ‘they’re exactly the same car, just with different numbers of doors’, production will actually be separated. The models will be built alongside their standard base cars, the M3 at Regensburg and the M4 at the Munich plant where E30 BMW M3 production began 28 years ago.

All the ingredients are present to make this a cracking sub-M Sport saloon, but the M340i puts outright pace and tech above real driver thrills and en…