Assuming you have access to a charger and don’t spend your days doing lengthy journeys the 330e potentially offers the lowest running costs. Official economy figures of 176-201mpg can be taken with a pinch of salt, but with an all-electric range of up to 41 miles most commutes could be tackled on battery power alone. Combine this with a low BiK rate (thanks to a 37g/km CO2 rating) for company car drivers and the 330e looks like a very attractive proposition.

The 320i and 330i post very similar economy figures with the 320i offering a best of 44.1mpg and a worst of 39.2 while the 330i’s stats vary between 41.5 and 38.7mpg. As these are WLTP figures they should be achievable when on a gentle cruise, but if you use the performance to its full then you’ll drop into the 20s.

Despite the demonisation of diesel there’s no getting away from the fact that the 3-series models wearing a ‘d’ badge are by far and away the most economical. The 318d with the manual box returns between 53.3 and 58.9mpg with the auto versions a couple of mpg less efficient. CO2 emissions of 112g/km look good, but for company car drivers it’s worth noting that from April 2020 this will rise to 137g/km under WLTP regulations which will make it a less appealing option in terms of BiK. 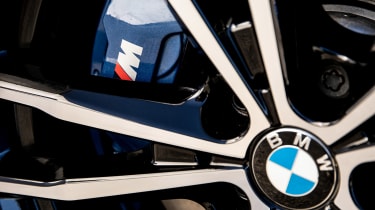 The 320d offers very similar figures to the 318d although when combined with xDrive average economy does drop into the high 40s rather than the low 50s. It’s the 330d that offers the best blend of performance and economy though as despite its pace it’ll return up to 47.9mpg, with a worse-case scenario of 42.2 for the xDrive M Sport. Even when driven hard 30mpg should be achievable.

With extended service intervals running a 3-series shouldn’t break the bank and BMW offers a pay monthly servicing option at £25 per month for 36 months. Given this only covers two services and the car’s first MoT it’s perhaps best avoided unless you really want to fix your motoring costs. Insurance groups range from 29 to 38, although the M340i xDrive may be higher than this once it’s added to the line-up.