Which of these performance compact estate rivals delivers the fullest package? 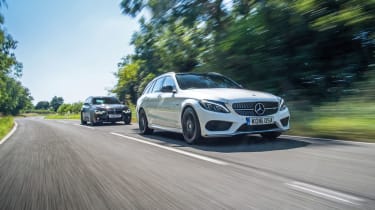 It’s going to take a while for us to get used to this new breed of AMG-lite. We’ve come to expect that cars from Affalterbach will be slightly unhinged, wild, tyre-smoking hooligans. The new C43, however, feels like it’s been created by a different branch of AMG, one run by engineers who value speed and grip over enjoyment, engineers who haven’t had one too many steins of Weissbier. Engineers who created the A45 AMG.

But perhaps we shouldn’t get too hung up on that, because by forgoing an exotic V8 engine in favour of a 362bhp twin-turbo 3-litre V6, the C43 brings an AMG C-class within reach of a wider audience. In estate form it costs £45,250, which is around £3600 more than BMW’s new 340i Touring.

The 340i replaces the 335i in the 3-series line-up, and uncharacteristically for a BMW, it isn’t adorned with a plethora of ‘M’ badges. It isn’t even part of BMW’s semi-hot ‘M Performance’ range. It’s just a normal car, albeit quite a powerful one. The 340i’s new 3-litre, twin-scroll single-turbo engine produces 321bhp and 332lb ft of torque, which make it good for a 0-62mph time of 5.1sec. Not bad for a non-M model. 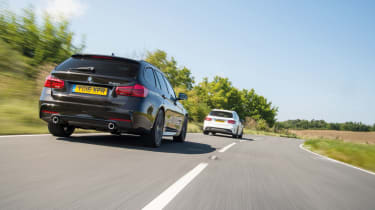 Its supple, cosseting ride quality certainly doesn’t make it feel much like a performance car, and when trundling down the road with the driving mode set to Comfort, the 340i is a very pleasant place to be. On the move the chassis feels noticeably sharper when you select either of the Sport or Sport+ driving modes. Thanks to a more aggressive throttle map, the engine feels more urgent too. Some of the ride quality diminishes, but the 340i now reacts more eagerly to steering inputs thanks to less body roll. The engine also makes more noise, but while the exhaust emits a deep but subtle growl for those outside, the soundtrack inside the cabin is mostly breathy. Stretch the engine to its lofty – by today’s standards – 7000rpm rev limit and it begins to emit a more satisfying timbre, although it’s still far from spine-tingling.

The eight-speed automatic gearbox slots each gear into place almost instantly, but despite the speedy changes the drivetrain never feels that urgent, even when cranked up to its highest setting; stand on the throttle and you have to wait momentarily for momentum to build before there’s a reaction. Once the power has found its way to the rear wheels, though, you can really feel them helping the back of the car around a corner. These transparent and innately rear-drive characteristics are so delightful to exploit that the BMW encourages you to push harder and drive faster.

Sadly the chassis begins to show its humble, estate-car roots the quicker you go. The front-end doesn’t possess the sort of grip we’ve come to expect of a modern performance car, and unless you’re very careful and measured with your steering inputs the 340i readily stumbles into understeer. Proportionally, there’s more rear-end grip than front, and that means the influence the throttle has on the back axle rarely escalates into anything very exciting. Try really hard to induce a slide and the rear feels very heavy, leaning considerably over the outside wheel. Then once grip has been lost, the body roll and lack of a limited-slip diff mean the resulting slide is scruffy, making you feel ham-fisted. 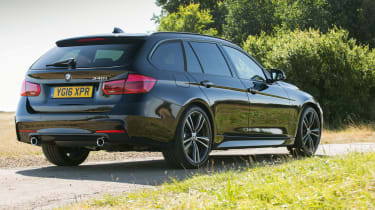 The BMW runs on a Bridgestone Potenza S001, a tyre we’ve been impressed with on other cars. However, whether it’s the weight of the 340i or the alterations BMW has made to the tyre (the star on the sidewalls denotes it has been specifically adapted for BMW), these Potenzas feel less like an ultra high performance tyre and more like a summer touring one.

This new AMG C43 shares its spangly grille with lesser C-classes, so it looks pretty sober. Only the four exhausts give the game away that this is no ordinary estate. Inside there’s hardly an abundance of AMG cues, either, but the car’s intentions are clear from the moment you drive off. The chassis is much firmer than that of the BMW, even in its more comfortable modes, and the steering, although light, is very quick.

On paper the Mercedes has the BMW covered, with that 362bhp supported by 383lb ft of torque, resulting in a 0-62mph time of 4.7sec. This is reflected by an eagerness to the C43’s drivetrain that the 340i could only wish for – the rev-counter needle dashes around the dial as if on a vacuum – although the twin-turbo V6 doesn’t rev as high as the BMW’s straight-six. The nine-speed auto gearbox is quick, with sharp, crisp changes that better those of a lot of double-clutch systems. Sadly, to avoid confusing the drivetrain and causing a long pause before the power comes back in, you need to change up by around 6200rpm.

The C43’s chassis doesn’t change dramatically between each of its drive modes. However, the dampers can be softened off separately should you want the slightly more pliant ride with the more immediate throttle map. Keep the engine, gearbox and suspension in their sportiest settings and there’s almost no slack in any of the controls. The C43 changes direction instantly, the chassis more than capable of keeping up with the quick steering. 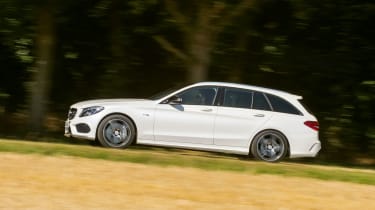 But as taut and responsive as the Mercedes is, it’s the sheer speed of the car that’s most remarkable. The 4Matic four-wheel-drive system contributes to an incredible amount of grip that means B-roads can be dispatched with disconcerting ease. You can throw anything at the C43 and it remains unruffled, but this incredible competence comes at the expense of any real interaction. The throttle doesn’t change the attitude of the car: a lift is as ineffectual as standing on the accelerator mid-corner, the C43 staying glued to its original trajectory. Only a lot of speed and some tactical left-foot braking will eventually induce some reluctant movement from the rear axle. The AMG’s incredible capability goads you to drive faster and faster in an attempt to instigate some sort of reaction, but it’s near impossible to maintain the speeds needed for the C43 to come alive on the road.

Having such performance available in small estate cars is, in itself, fantastic, and both the BMW and AMG are talented in their own ways. The BMW doesn’t purport to be a performance car and it doesn’t quite have the power and pace to match the overtly sporty AMG, but it certainly holds its own in this test, being involving and rewarding to drive if kept within its limits. By contrast the C43 can be aloof. With unrelenting grip and composure it never shows a playful side, making it difficult to fall for. Its sheer competence means it wins this test, but it wins few friends in the process.