Packing 309bhp, this is the most powerful 4 Series yet, and it comes complete with four-wheel drive 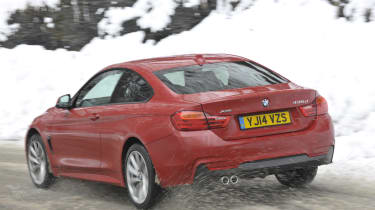 The BMW 435d xDrive M Sport Coupe. Decode that impressively long name, and you get a 3.0-litre straight-six diesel-powered 4-series Coupe, with four-wheel drive. It’s one of the few 4 Series models to be equipped with the xDrive four-wheel drive system, which feels more rear biased than most. With prices starting at £45,040, it’s the top of the tree in terms of 4-series diesel models.

The four-wheel-drive system itself is brilliant. We’ve already experienced it in the 330d xDrive Touring, and comments for the 435d are very similar – xDrive is pretty much imperceptible until you actually need it. Drive from the 309bhp, 465lb ft twin-turbo six-pot diesel is sent forwards through an electronically controlled multi-plate clutch behind the gearbox. Normally 60 per cent of torque goes to the rear axle, but the system can divert up to 100 per cent to either end in just 0.1sec when slip is detected.

Driving on some snow-covered Alpine roads reveals the 435d never loses its rear-driven feeling, but once the back starts to slip, xDrive responds quickly, sending more effort forwards to help pull you back to your chosen line. On drier roads, the effects are more subtle – and that’s despite our test car sitting on winter tyres. At everyday speeds the 435d feels pretty much exactly like its rear-drive sisters, up to its opening gambit of gentle understeer when you carry too much speed into a corner.

You can power through this and get the four-wheel drive working, but it takes a big throttle opening (or a mid-corner slide) to persuade xDrive that you really need some help. It finds noticeably more traction than you get in the rear-drive 435i and, once doing its thing, it puts the car into a nice, neutral, rear-led stance, or even mild oversteer.

The 435d is more cruiser than bruiser, though. While it steers accurately and grips well, it feels bigger and heavier than the old E92 3-series Coupe, and its electric power steering seems to have been set up to deliver a constant weighting rather than any meaningful feel. You detect the car slipping through your stomach rather than your fingers. But the car is extremely stable at speed and the dampers maintain tight control without ever feeling over-hard.

Predictably, the engine is more about torque than power, and although the motor spools up quickly, the standard eight-speed automatic gearbox delays things in Drive while it tries to decide how many ratios it needs to shed. If you know you’re going to need to accelerate hard, it’s better to override it manually beforehand. The engine is muted most of the time and acquires a nice rumble in the middle of the powerband, but wringing it out leaves you in no doubt what fuel you’re running on. But diesel does give the 435d some unarguable benefits – foremost (according to the trip computer) the ability to average 100mph and 40mpg at the same time.

Yet apart from four-wheel drive, it’s not really obvious what the 435d brings over the considerably cheaper 430d or the more charismatic 435i. It’s when BMW offers the six-cylinder petrol engine with both xDrive and a manual gearbox that I suspect we’ll find the ultimate non-M 4-series.

The xDrive’s main rival comes from Audi, in the shape of the A5 3.0 TDI Quattro. Audi’s offering is slightly cheaper at £40,140, but it’s also considerably down on power, with just 242bhp from its 3.0-litre V6 diesel. Audi’s Quattro four-wheel drive system is slightly more conventional, and the A5 is a less focused car to drive on the whole.

Anything else you should know?

In Britain – presumably at the behest of the marketing department – we’re only getting a relatively small part of the xDrive range. So you can have an xDrive 320d or 320i, but you can’t get xDrive on a 328i or a 330i – or any 5- or 6-series. There’s an xDrive version of the 330d, but not the mechanically identical 430d, and while buyers in mainland Europe can buy an xDrive M135i, we’re denied it. Meanwhile, if you want either a 335d or a 435d then xDrive is compulsory – there’s no two-wheel-drive version any more. Yet the 7bhp less powerful 335i and 435i remain rear-drive only. It’s enough to make your head spin.