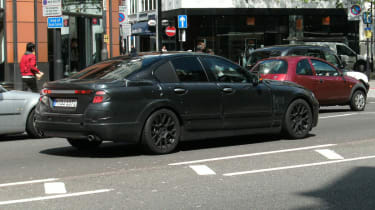 BMW’s new 5-series is nearly showroom-ready, and evo spotted it out testing in the centre of London.

While it still wears a disguise, it’s easy to spot the Five’s subtler and cleaner styling compared to the outgoing car. The controversial E60 5-series, designed by Chris Bangle, divided critics when it replaced the much-loved E39 5-series in 2003. And in keeping with the new 7-series, the styling for the new car appears toned back down.

evo snapped a pair of cars out in London, a saloon and Touring estate, although very few people were giving them second glances. As soon as the camera came out, a German-plated RHD 7-series attempted to flank the disguised cars and block them from view.

The rear lights of the Five are set to be similar in style to the Seven, while huge clues to the front of the car were provided by the 5-series Gran Turismo (pictured in gold, right) which appeared at the 2009 Geneva motor show. That will be a new addition to the range, slotting above the saloon and estate both in price, size and luxury.

The all-new BMW 5-series will go on sale in 2010, and could get its big unveil on home turf at the Frankfurt motor show this September. There’ll be a new M5, too, which is set to get the 547bhp twin-turbo 4.4 V8 from the recently unveiled BMW X5M and X6M, as the M division heads down a route of forced induction. Read about that in issue 131 of evo, on sale April 29.