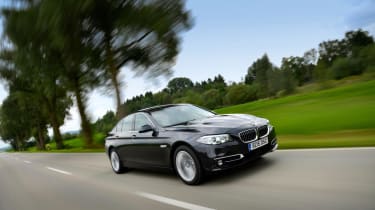 They might be powerful engines but they sure aren’t wasteful as a result. The figures listed here are the best BMW quotes for a given engine/body; it’s worth bearing in mind that higher specs (and therefore, bigger wheels and tyres) increase BIK and emissions ratings. In all instances where it’s an option, the automatic gearbox makes a model ‘greener’.

Service Inclusive packages are available for the BMW, as is the three-year/60,000-mile warranty. The 5 Series is one of the most desirable cars in its class, so residual values will remain strong, even though there are a lot of them on our roads.