From gesture control to remote parking, we get to grips with the technology-fest that's at the core of BMW's new 7-series 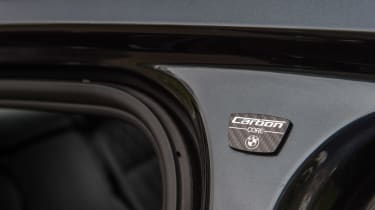 The new BMW 7-series might just be the most technologically advanced production car ever to go on sale. From an in-car tech perspective, it most definitely is. The sheer amount of gadgetry on offer, both in terms of driver assist systems and what the latest generation iDrive system is capable of, is truly bewildering.

It’s a huge statement of intent from BMW, which has all too often been on the technological back foot to Mercedes and its S-class. Just about every piece of technology found in the 7-series – including its innovative ‘Carbon Core’ chassis, which mixes carbonfibre components with steel and aluminium parts to help reduce weight – will eventually make its way down to other models in the company’s line-up, too.

Let’s look at the revamped iDrive first. Touchscreen technology has been added to the 10.2-inch high-resolution display in the centre of the dash, making for a more intuitive, user-friendly experience than you get operating the click-wheel on the transmission tunnel. 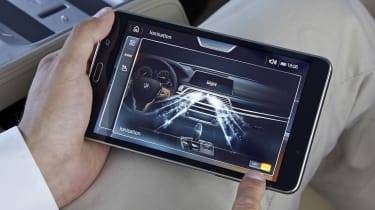 Things don’t stop there, however, as you can now use gesture control to carry out basic iDrive commands. For example, rotating your finger clockwise in front of the display will raise the volume. Even better, one of the five gestures recognised by the system can be given a custom function, so you can quickly call home or find directions with a simple hand movement. And while some gesture control systems struggle to recognise commands properly, this one appears to work every time.

For rear-seat passengers, it’s possible to option two 9.2-inch HD displays, both of which give access to the core functions of iDrive. The screens themselves boast vivid colours and pin-sharp visuals that are a step above what the competition offers. Integrated into the central armrest between the rear seats, meanwhile, is a 7-inch tablet that can control such things as the climate control and infotainment system.

One place where you don’t normally see a screen is on a car’s key, but that’s exactly what you’ll find on BMW’s ‘Display Key’, which comes as standard with the new 7-series. It enables you to remain connected with the car even when you’re away from it, allowing you to remotely operate the climate control and check the fuel level and range and the current servicing requirements. A wireless charger built into the car’s storage cubby keeps the key’s battery topped up and will also charge compatible Android phones, or iPhones wearing an optional BMW case. 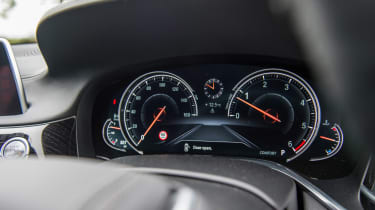 The key’s real party piece, though, is the way it allows you to remotely park the 7-series. Step out of the car with it facing a space and you can slowly move it forwards or backwards using the key. Handy, perhaps, if you’ve got a garage that will accommodate a 7-series, but which isn’t wide enough for you to open the car’s doors once inside.

While the many new features of this 7-series are undeniably impressive, you could of course question how many of them you actually need. Perhaps more useful than remote parking would be further simplifying how the ever-growing plethora of functions are accessed. Click-wheels, touchscreens and gestures are all well and good, but a truly honed voice control system that can reliably understand natural speech would be a real step forward, and something we’ve yet to see in a production car. Perhaps one for the next 7-series, BMW?