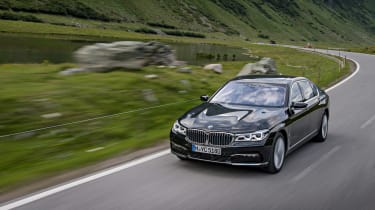 BMW has revealed details on its plug-in hybrid 7-series, known as the 740e.

Using technology derived from that of the BMW i sub-brand cars – the i3 and i8 – the plug-in saloon is designed to mix high performance with minimal fuel consumption.

The key figures here are 254bhp, which is the figure produced by a four-cylinder petrol engine sitting under the bonnet; 110bhp, developed by the electric components integrated into the eight-speed Steptronic automatic. The combined system output is 322bhp, which results in a 0-62mph time of 5.4sec.

The other key figures – those of economy – are 29 miles and 134.5mpg. The former refers to the 740e’s all-electric range from its 9.2kWh battery pack, and the latter is the (almost certainly ambitious) official combined fuel economy figure.

That number will depend very much on where the car is used and how often its driver charges the battery pack (city-only drivers could potentially use very little fuel at all, long-distance owners won’t see much benefit from petrol-only running) but it finally gives BMW a competitor in the increasing plug-in luxury market: Porsche and Mercedes-Benz already sell short-range plug-in hybrid luxury saloons.

CO2 (or lack thereof) is the other benefit, at 49g/km. All these numbers change slightly for the 740Le xDrive, including the 0-62mph time which drops by a tenth thanks to the extra traction of the all-wheel drive system. 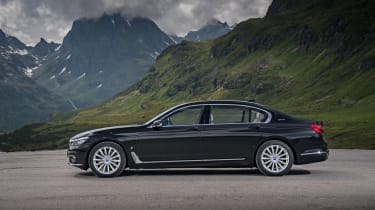 Emissions climb to 54g/km and the combined fuel consumption increases to 117.7mpg, while the same 9.2kWh battery pack will get owners two miles fewer on a charge.

Both models feature an eDrive button that allows the owner to cycle between different driving modes. Default running uses electric power alone at lower speeds and enrolls the petrol engine above 50mph, but the eDrive button allows for electric-only running in certain situations – up to 87mph – and also the ability to store battery charge on the move, ready for a zero-emission zone later in the journey.

Regular driving modes include BMW’s usual Eco Pro, Comfort and Sport settings, which vary the behaviour of the engine and transmission, the air suspension, and steering response.

Visually, differences to the standard 7-series are minimal: The keen-eyed will spot the battery charging port door in the left front wing, the eDrive badges and BMW i Blue elements in the kidney grille.

Standard kit includes LED headlights, BMW’s weighty and complicated ‘Display Key’ and a full suite of ConnectedDrive functions. Like all 7-series, both cars use the i-brand inspired Carbon Core technology, which has helped save 125kg on average compared to the previous car. 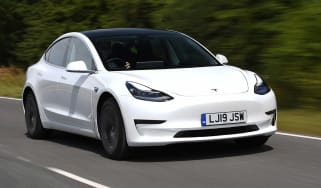