The Porsche Panamera S E-Hybrid is a plug-in preview of the 918 Spyder. Is it also a great sports saloon? 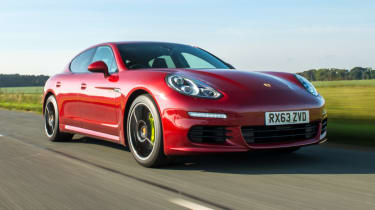 The Porsche Panamera S E-Hybrid. It’s the company’s first plug-in hybrid, the second being the Porsche 918 Spyder, due later this year. It replaces the previous-generation, non-plug-in Panamera Hybrid and, like its predecessor, is a parallel hybrid – in other words its (rear) wheels can be driven by the car’s combustion engine, its electric motor, or a combination of both. At £88,967, there’s a rise of around £2500 over the car it replaces.

Combined power from the E-Hybrid’s supercharged petrol V6 and electric motor is 410bhp, of which 94bhp is delivered by the electric motor. Fuel consumption and CO2 emissions are claimed to be 91mpg and just 71g/km respectively. The 0-60 sprint takes less than 5.5sec, and the E-Hybrid can reach a 167mph top speed (it also tops 80mph when using electric power only, an impressive figure). It qualifies for London Congestion Charge exemption and reaches full electric charge in four hours. The E-Hybrid could also, in theory, complete a lap of the Nurburgring Nordschleife on electric power: its claimed ‘E-Power’ range is 11-22 miles.

The E-Hybrid is launched at the same time as the Panamera’s first major range update, with refreshed styling and the introduction of new technology, including the frequent gaggle of electronic safety systems (lane departure warnings, blind-spot monitoring, etc) and a smartphone app that allows remote control of some of the car’s features.

Initially, the E-Hybrid doesn’t feel like a Porsche. The familiar creaminess of the controls, consistent brake pedal feel and alert responses are dimmed slightly. The sole remaining echo of that signature Porsche feel is in the taut body control: disappointing, but unsurprising when you consider the E-Hybrid weighs 2095kg – 285kg more than the regular Panamera S (which also has a petrol six-cylinder).

E-Power mode is the default on start-up, delivering lazy but adequate performance. Refinement is off the scale, as you’d expect. The electric motor is virtually silent, with just a muted rumble from the tyres reminding you that you’re connected to the road surface rather than floating just above it.

You can reach 84mph on E-Power alone, but the petrol engine is always primed for additional urge, and likewise when in petrol-engine mode the electric motor can boost performance on kickdown of the eight-speed Tiptronic automatic gearbox.

In terms of handling, the E-Hybrid offers balance and security but little of the connection we expect of Porsches: the steering is direct but vacant, and brake feel is poor. Ultimate grip and agility is high, but trying to extract performance from the E-Hybrid is a joyless experience. The diesel Panamera is markedly more alert.

The official mpg and CO2 figures collude to a point where the E-Hybrid costs similar to a BMW 320d Efficient Dynamics in company car tax. If your commute is short, includes a congestion charge area and has a power point at either end, then the E-Hybrid makes some sense. But if you enjoy driving, the £62,992 Panamera Diesel is a far better option.  The wonderful V8-powered Porsche Panamera GTS, meanwhile, costs little more at £93,175 and judging by the times we’ve driven each, it’s mpg figure won’t be worlds away from the E-Hybrid’s.

If the salesman points to the trip readout after a few miles of a test drive, you’ll witness an astonishing number. But continue beyond the initial electric phase and the number slowly falls as the petrol engine generates charge for the battery and has to push around the weight of said battery. For us, the E-Hybrid eventually settled at around 26mpg for general usage: a long way off real-world diesel Panamera figures and around the same as the standard petrol V6 car.