We catch the new 5-Series based BMW PAS winter testing 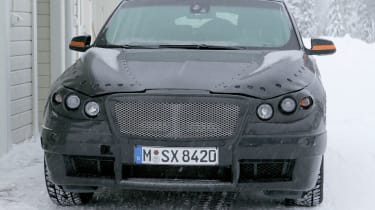 Winter-testing has begun up in Lapland – and here’s the first real prototype our spies got to see this afternoon: the new 5-Series-based BMW PAS. We were told BMW’s new X6 would be a direct rival to the Mercedes CLS – and that it is definitely not.

BMW also made us believe the new PAS (or RFK, if you prefer) would be Munich’s answer to the Mercedes R class – but again, this appears to be a false information. Our spy-shots of the PAS now reveal it’s a true fastback, allowing more headroom than in the X6 while being significantly smaller than Mercedes’ R-class. The more car-like approach seen on this prototype seems better-suited to BMW’s values than a full-size van, and although these spy-photos do not reveal all of the car’s design, enthusiasts might be a bit disappointed by the car’s rational design. We expect more or less all 5-series’ engines to be available for the PAS, too. Never seen before was the interior of the new car, and though the dash is still heavily disguised, our shots still reveal details such as the gear lever and iDrive.