As well as being lighter than a standard M2 the CSR has the M4 GTS's engine. It should be fast. 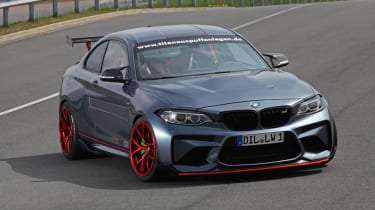 Just when you thought the BMW 2-series couldn’t get any sillier than AC Schnitzer’s 562bhp ACL2, Lightweight Performance has thrown a modified M4 GTS engine with 590bhp and 544lb ft of torque into an M2 and called it the CSR.

The increase of a 100 horsepower over the standard M4 GTS engine has been achieved by altering the turbochargers of the S55 engine. An improved air intake system has also been added in conjunction with a new lightweight exhaust set-up.

> Read our review of the AC Schnitzer ACL2

All of the power is transferred to the rear wheels via BMW’s dual-clutch transmission with the faster GTS changes and software. This is unlike the ACL2 that uses the lighter manual gearbox from the M4.

The CSR’s visual alterations are equally as ludicrous as the engine upgrades. Carbonfibre has been used for the wing mirrors, new rear wing and much revised front splitter. Its appearance has been rounded off with new metallic red 19-inch rims, which help it look like a genuinely mean GT3 racing car for the road. 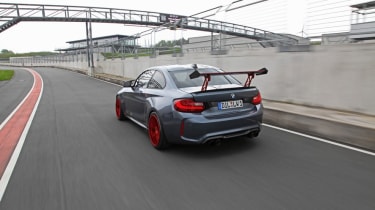 > Find out what the BMW M4 GTS is like to drive

There is further indication that this new CSR is more track-focussed than any M2 iteration prior, and potentially even more so than the M4 GTS. As well as the extra power, the CSR comes with a Drexler limited-slip differential, 265/35 front and 295/30 rear section Michelin Pilot Sport Cup 2 tyres, and tastefully-coloured fluorescent green carbon ceramic brakes as standard.

The driver is cocooned in a cabin with abundant levels of carbon fibre and Alcantara further reinforcing the racing car theme. A full roll cage replaces rear seats, while the driver and passenger sit in carbonfibre buckets with full race harnesses. This helps reduce the CSR's weight by 195kg over the standard M2.

> See what we think about the stanard BMW M2

With an M4 GTS having a lively rear end at the best of times, it would be fair to assume that the CSR, with an extra 100hp, may be just as animated on the limit. Will this car the build on the GTS and become everything we hoped the hardcore M4 would be, or will it simply be too extreme to use on a daily basis? I think we may have to have a go. 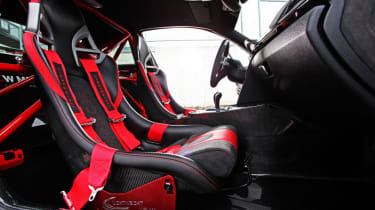