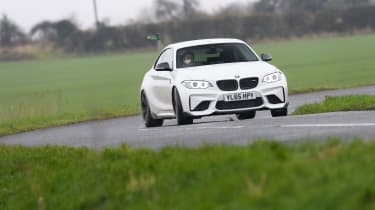 BMW’s M2 isn’t short on aggression. Pumped up arches, short overhangs and low stance give it a determined pugnaciousness that’s not matched by many cars. Yet, even BMW themselves think it could look even meaner and offer a range of parts that can be fitted by a BMW dealership to help personalise, and beef-up the baby M-car. The concept is nothing new, though, as these modifications are BMW’s own take on what the aftermarket scene has been doing to its cars for years.

So what’s new? Lets start from the front and work back. A set of black kidney grilles, rather than the usual chrome items, give the M2 a similar look to the M3/4 Competition models. Then there’s winglets on the lower corners of the front bumper, new door mirror caps and side vents, sill covers that curl up just before the rear wheels, a boot spoiler and a new rear diffuser. All of this is made from carbonfibre.

Inside the raw, unvarnished carbonfibre of the standard M2 remains but there’s Alcantara covering on the dash as well as a gear and handbrake gaiter and brushed aluminium pedals.

Rather than just a selection of aesthetic upgrades, BMW also offers a louder exhaust – that comes with carbonfibre tips to match the other M Performance accoutrements – and a set of height-adjustable coilovers. The optional suspension allows you to lower the M2 from its standard ride height to 20mm lower, or any increment in between.

There might not be any extra power but the M Performance modifications have the capacity to change not just the way the M2 looks but how it drives, too. 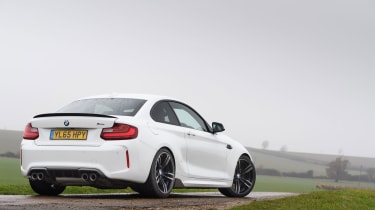 The new exhaust might not be made from any really special or exotic materials, it’s a stainless steel system, but what you can do is adjust its volume with a separate Bluetooth button.

When you turn the car on the exhaust automatically defaults to its quietest setting, then, with a double press of the machined steel button on the canister-like device – it’s about the same size as a plastic photographic-film container, if you’re old enough to remember those – you can open a flap in the exhaust to make it louder. With the double click comes a flashing light on the top of the device to let you know, if you can’t already hear it, that you’ve activated Track Mode. 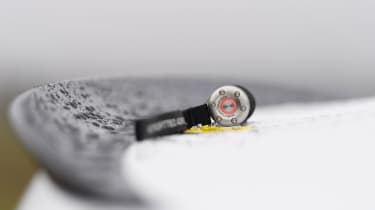 None of the M Performance upgrades have any effect on the engine, so the M2 still has it the 3-litre single-turbo straight-six that produces 365bhp and 369lb ft of torque.

Most of BMW’s own modifications can be made to both the six-speed manual and seven-speed DCT versions of the M2. However, you can’t fit an Alcantara gear lever gaiter on cars equipped with the dual-clutch ‘box – the short stubby lever that the semi-auto transmission comes with sprouts from the centre console without any need of a fabric or leather covering.

With no extra power the M Performance M2 still accelerates from 0 to 62mph in 4.3sec when fitted with the DCT gearbox, and 4.5sec with a manual.

The new exhaust isn’t obvious when you start the car, you’d have to be very familiar with a standard M2 to notice that it’s any louder. Double tapping the button, however, immediately changes the tone and, even at idle, there’s a deep blare from the back of the car. The noise from within the car is never deafening or too loud, but the extra volume and harder edge to the noise under throttle adds some welcome drama. It’s especially tasty at the top end, giving the M2’s relatively ordinary engine some character.

The M2 retains its driving modes, and a toggle switch allows you to switch between Normal, Sport and Sport+. Select the more performance oriented modes while the exhaust is in its loud mode – the car’s engine and the new exhaust can be controlled completely separately from one another – and as well as the extra volume under acceleration, there’s a pop and rumble on overrun.

With the exhaust in its quieter setting there’s a distinct drone at motorway cruising speeds. But, oddly, it all but disappears with the exhaust flap open and it’s ends up being quieter in Track Mode at 70-ish mph.

> Read our review of the basic BMW M2

Of all of the M Performance alterations, it’s the new suspension that has the potential to change the M2 the most. But, initial impressions are that it’s hardly any different; the ride isn’t any harsher, it doesn’t feel any stiffer and its no less inclined to roll. And sadly, just like the basic of the car, the rear suspension doesn’t want to settle and over really rough roads you do have to be patient with the throttle. 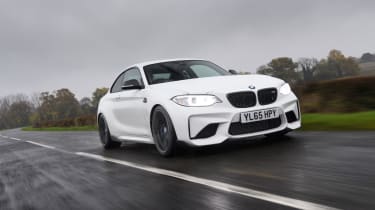 When you do get the opportunity to increase your speed the M Performance suspension gives it noticeably more grip when cornering. The balance is much the same front to rear, it doesn’t have the extreme front-end traction that an M3 or M4 has, but you can carry slightly more speed through a corner than the standard car.

Although the rear end doesn’t feel like the most sophisticated of axles there’s still a real profound connection with it as you turn in; your instantly aware of the amount of grip it has. That means you know exactly when to get on the throttle, and by exactly how much. Its an attribute that can be found in the a standard M2, and its reassuring to know the M Performance suspension hasn’t disguised or eradicated that feeling.

Despite the extra grip, the engine is still strong enough to overwhelm the rear tyres through a lot of corners and you can’t always use full throttle as you exit a bend. That ability combined with your deep understanding of what the rear tyre are coping with means you have the option of just how to deal with a corner, neat and tidy or wild and lairy. The manual gearbox, where you can make less abrupt gear changes than the optional DCT, allows you greater access to that control, too.

Just like a basic M2 one fully equipped with BMW’s M Performance upgrades is a fast, fun and incredibly involving car, even if it lacks the most sophisticated of chassis. The louder exhaust adds some drama while there are no downsides to the low and aggressive stance. 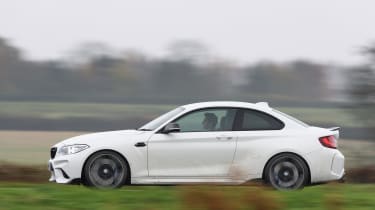 The M Performance upgrades can all be bought individually; even the exterior changes can be selected separately. The black grilles costs £214, the mirror caps £536, the side skirts £882, the flicks below the front bumper £888, the rear diffuser £900 and the spoiler £499.

Of course BMW isn’t the only one to offer upgrades to the M2. Respected BMW tuners AC Schnitzer offer an exhaust system and adjustable suspension for the M2 at a similar price to the M Performance equipment. As does UK-based outfit Lichfield. However, unlike M Performance, both of these tuners also offer a power upgrade.