BMW has previewed a suite of parts which will be available on the new M2 Competition. 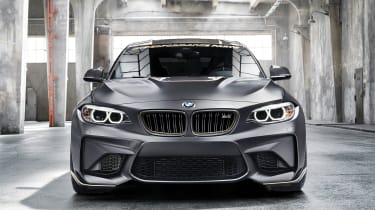 BMW launched the M Performance Parts Concept at the 2018 Goodwood Festival of Speed. Based on the most junior M-car, it’s equipped with a range of M Performance Parts, developed for the forthcoming M2 Competition, which reduce the car’s weight by 60kg and optimise aerodynamics.

BMW has saved weight all over the car, shaving kilos with numerous lightweight, replacement parts constructed from carbonfibre. These include the bonnet, the roof and pair of front side panels which save a combined 17kg, while the bootlid and rear diffuser save a further 5.5kg. The carbon makeover brings new sills and a radiator grille, too, although these additions serve form rather than function.

It’s in the cockpit, however, where BMW has stripped the most weight, finding 22kg with new seats for both rows. Alcantara, carbon trim and gold accents lend the cabin a racy feel. Elsewhere, a new battery – 14kg lighter than its standard counterpart – drops the weight further.

A new coilover suspension package, already available on the M Performance parts list, reduces the ride height by 20mm and includes dampers, which are adjustable to 12 different compression stages and 16 different rebound stages.

The extensive range of carbon parts will be made available at different times over the course of the next eight months, with a selection of them available following the M2 Competition’s launch later this year.