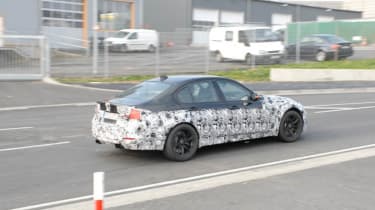 Pictures of the new ‘F30’ BMW 3-series have barely been released, and already spy photographers have captured a prototype of the new M3 near the Nurburgring.

The four-door test mule – complete with the M3’s trademark quad exhaust tailpipes – shows that BMW is pressing ahead with the development of the new car earlier than normal in the 3-series model cycle. Company insiders have previously admitted they want to increase the lifetime of M-cars, meaning they will be launched closer to the introduction of the basic models.

The M3 badge is likely to only be used on the saloon version, as the coupe and cabriolet versions are set to wear 4-series branding, meaning the M version is likely to become the ‘M4’ – we’ll leave the motorway-based puns to you.

There are no official mechanical details to bring you yet, although BMW insiders have all-but confirmed that the new car won’t use either an eight cylinder or a four cylinder engine, meaning we can anticipate a return to a straight-six configuration, likely working in conjunction with either two or three turbochargers. Like the new M5, the M3 is likely to have significantly improved fuel economy and reduced CO2 emissions.