But there is more to this story from our exclusive chat with BMW M's head of product planning... 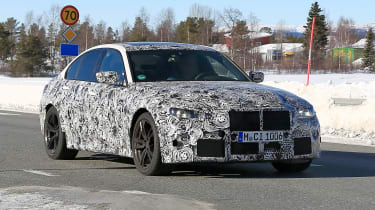 BMW’s new M3 is scheduled to debut later this year at the Frankfurt motor show, but this hasn’t prevented BMW M’s head of product planning, Carsten Pries, confirming the powertrain that will be used to power the M division’s rival to AMG’s C63, Audi’s RS4 and Alfa’s Giulia Quadrifoglio.

First making an appearance in the new X3 M and X4 M SUVs is an all-new 3-litre, twin-turbocharged straight-six tied to an eight-speed double-clutch gearbox and the company’s latest xDrive all-wheel-drive system. And once the X-cars appear on the roads later this year, BMW M will turn its attention to readying the new M3 with the same powertrain. Yes, this does mean the next M3 is to be four-wheel drive. Sorry about that.

> Click here for our review of the current BMW M3

The new straight-six will, like its rival AMG V8, be offered in two states of tune: in this case 480 and 510bhp, the latter badged Competition. Both will make 442lb ft of torque, and it’s likely that, as with the X3/4 M, only Competition models will make it to the UK. And if the thought of a four-wheel-drive M3 brings a tear to your eye, try not to be too disheartened, because while the X3/4 M are fitted with an adapted M5 xDrive system but without that car’s rear-drive-only mode, the M3 will get the wizardry that allows you to send every last bhp and lb ft to the rear wheels alone. 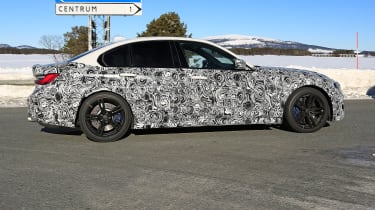 Also carried over to the new M3 will be the latest evolution of the M5’s electronic steering that will be developed to suit the M3’s lower weight (expect it to tip the scales at around 1600kg). There will also be a more dynamic approach to its chassis set-up, achieved by fitting the latest active damper system from the M5, optimised to benefit from the M3’s new bespoke front and rear subframes. The car will also have a stiffer front strut brace and additional engine bay bracing, a principle that will also debut on the new X3/4 M models, as will all of the aforementioned hardware.

The new M3’s standard brakes will have four-piston calipers at the front with a 395mm disc, although unlike the two new M SUVs the saloon will also be available with BMW M’s latest generation of carbon-ceramic brakes. Expect 19- and 20-inch wheel options (the X3 and X4 Ms will have 20s and 21s), and Michelin’s Pilot Sport 4 S tyre as the standard offering.

> Click here for our review of the Audi RS5 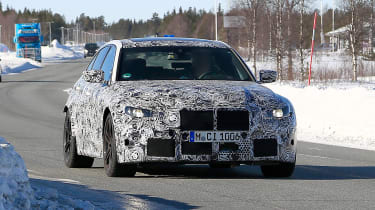 The switch to xDrive and an automatic gearbox as standard for the most iconic M model isn’t great news for those of us who enjoy the art of driving as much as we do chasing tenths of a second around a lap. We understand the rationale and how such technology extends the brand appeal to those who might otherwise head to their Audi dealer, and yes, with 500-plus bhp and near on 445lb ft there are limits to what a single driven axle can manage, although AMG doesn’t feel it’s much of an issue… But, while the German power race remains all-consuming, these are the cards we are dealt. Then again, the current M5 hasn’t turned out all bad…

There could, however, be a rear-drive, manual-gearbox light at the end of the tunnel. In the past, M’s CS models have been the most powerful, quick and focused offerings, but there is a suggestion that a new M3 CS could focus less on performance and more on a purer driving experience. This would be achieved by offering a rear-drive, manual model, whose turbocharged six would produce less torque (and subsequently power, too) to preserve the gearbox’s internals, but would also shun some of the complex – and heavy – technology that burdens modern performance cars. It sounds like an M3 evo would build. Hopefully BMW will, too.