A low-mileage BMW M3 CSL is going to auction later this month with a £40k-plus estimate. 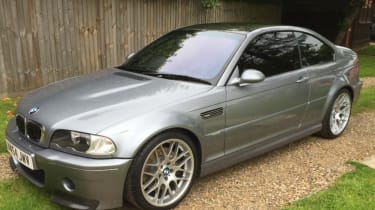 On the final weekend of March, at the Classic Car Auctions Practical Classics sale, a BMW M3 CSL is going under the hammer with an estimate between £40-45k. Showing just 36,000 miles on the clock, it provides a rare opportunity to take ownership of a true BMW Motorsport icon for reasonable money.

Conceived as a harder-edged, track-variant of the E46 M3, it sold in limited numbers – just 422 were registered in the UK – the majority of which were specified in Silver Grey Metallic, just like this example. It’s judged by CCA to be in very good condition, scoring four out of five stars on the attached condition report (five star ratings are generally reserved for concours show cars), which indicates it’s been well cared for by previous owners.

The BMW M3 endured a 95kg diet in its transformation to CSL (Coupe, Sports and Lightweight) specification: carbonfibre panels replaced heavier metal items – such as the roof – while the front-seat shells and rear bulkheads were constructed from glassfibre plastics, and an aluminium honeycomb sandwich arrangement formed the boot floor. 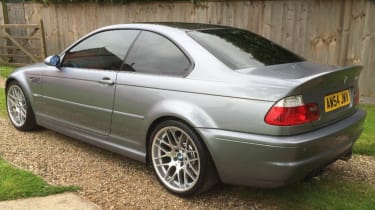 To complement the weight loss BMW tweaked the 3.2-litre straight-six and saw to the chassis, too. A new intake system consisting of a carbon airbox and trick software, that constantly adjusted the fuel-to-air mixture, delivered increases in power and torque, lifting the respective totals to 355bhp and 273lb ft.

The chassis revisions, however, were more comprehensive: both the front and rear tracks were broadened, a more aggressive geometry set-up was configured and new spring and damper units were fitted, too.

Some may baulk at the prospect of a £45k BMW M3 that’s covered nearly 40,000 miles, especially when you consider similar money buys you a brand new BMW M2. However, values for the CSL will continue to rise as the supply for naturally aspirated sports cars drys up.

‘The CSL immediately proves itself to be one of those cars that naturally draws you into upping the pace, cajoling you into braking later and harder carrying more speed to the apex. It really comes alive, revealing a much keener, harder edge than any previous M3’.

This example will go under the hammer on the weekend of 24 and 25 March at the NEC in Birmingham, alongside a collection of other affordable classics such as a 1988 Ford Sierra Sapphire RS Cosworth, Nissan R33 GT-R V-Spec and 1965 Porsche 912.