With the BMW M4's direct rivals getting on a bit, we pit it against a foe far tougher - the Porsche 911 Carrera. Track battle video here 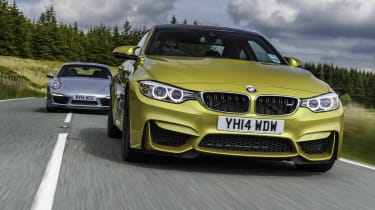 BMW M4 vs Porsche 911 Carrera. Pitting the high performance version of a car more acclimatised to the outside lane of the motorway against a bona fide sports car with over 50 years of lineage may seem harsh, but then the replacement for the BMW M3 coupe arrives on the market with its direct rivals from Mercedes and Audi ageing and far from fighting fit.

And on paper, there’s plenty to suggest that the BMW will give this track battle around Anglesey Circuit a very good go. Its 3-litre straight-six twin-turbo engine produces peaks of 425bhp and 406lb ft, figures which very comfortably outshine the 345bhp and 288lb ft of the 3.4-litre flat-six engine in the entry-level Porsche 911 Carrera.

At 1537kg with its optional twin-clutch paddleshift gearbox fitted, the M4 is a stocky 137kg heavier than the PDK-equipped 911, yet its power and torque advantages ensure its 4.1sec 0-60 time is the quicker of the two by half a second. It loses out on top speed, its electronically limited 155mph down on the 911’s claimed 178mph, but then that’s an irrelevance on the twists and turns of Anglesey.

Both cars come with trackday-friendly options boxes ticked in the form of carbon-ceramic brakes (the BMW’s 400mm front, 380mm rear, the Porsche’s 340mm front and rear) and with their seven-speed twin-clutch paddleshift gearboxes in place of more tactile, but ultimately slower standard-fit manual transmissions.

Our tame racing driver on track is Marino Franchitti, winner of this year’s 12 Hours of Sebring race back in March. He sets the lap times then talks us through the intricacies of each car’s fast lap.