BMW’s next M4 coupe promises much, but will it deliver? Here’s everything we know so far 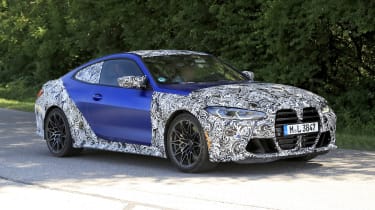 Following sightings in early July, spy photographers have snapped the next M4 Coupe undergoing further tests. This time, in less disguise. Though the new M4 is expected to launch later this year, a full reveal date is still yet to be announced. However, BMW has provided us with technical details about its upcoming performance coupe.

As confirmed in an official teaser from BMW M CEO Markus Flasch, the new M4 will receive the same controversial grille as its standard 4-series counterpart. The latest test mules also reveal its redesigned front bumper, complete with larger intakes for improved cooling.

Though the latest reduction in camouflage reveals the use of ‘Frozen Marina Bay’ blue paint, it doesn’t provide us with much more detail. The new Competition-style wheels are now finished in a sharp diamond-cut finish, however, and are wrapped in sticky Michelin Pilot Sport Cup 2 tyres. The front receives no design changes, with only uprated M Performance exhaust tips separating it from previous mules at the rear.

Look past the new grille and you’ll notice the use of wider, more aggressive front arches, aerodynamically sculpted M wing mirrors, wider side sills and, of course, the trademark central quad-tip exhaust exits. Though they may not represent the final article, it’s also clear that these test mules lack the famous M bonnet bump, a feature first seen on the E46 generation. 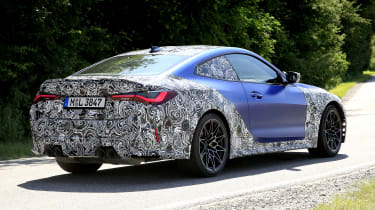 Behind the newly designed Competition-style wheels sit a set of carbon-ceramic brakes, complete with gold callipers - four-piston items with 395mm steel discs are likely to come as standard. Meanwhile, 19- and 20-inch wheel options are to be expected, wrapped in either Michelin Pilot Sport 4 S or track-focussed Cup 2 tyres.

Though the design is still under wraps, we now know that both the M4 and its four-door sibling will come equipped with the S58 3-litre twin-turbocharged straight-six. Based on the B58 found in BMW’s M-lite 40i products, it adopts a larger bore and a shorter stroke for a marginal reduction in capacity and increased 7250rpm rev limit.

A lower compression ratio is also used for more power, with the B58’s single twin-scroll turbocharger swapped for a pair of single-scroll items, and the oil pan, intake, oil coolers and heads uprated for increased performance. Though you’ll receive 442lb ft of torque across the board, you’ll have the option of either 473bhp in the standard car or 503bhp should you opt for the M4 Competition. 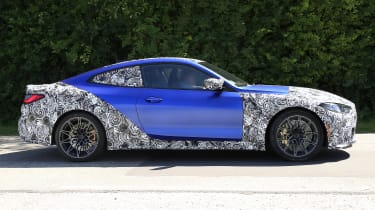 Though rumours suggested the new M4 would be available only in all-wheel-drive form, the marque has confirmed that base versions will be a six-speed manual, rear-wheel-drive affair. The more expensive Competition will come with an eight-speed automatic and an xDrive all-wheel-drive system, however, with RWD available at the push of a button, similar to the system seen on the F90 M5.

One thing to note is that the UK hasn’t received non-Competition variants in recent times. Should this be the case with the new M3/4, we may be left without the rear-wheel-drive, manual version. No official information on model availability has been announced, however, so time will tell…