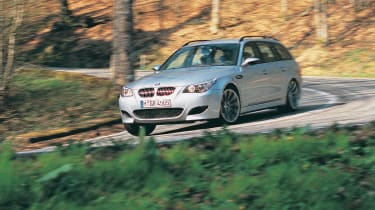 Our schedule is tight: pick up the M5 from BMW in Munich at 1pm on Tuesday and then drive it 450 miles to Epernay in the Champagne region of France, where an RS4 Avant will be waiting. Tuesday will start on the fast, flowing roads around Epernay, and then we’ll head north to the more testing routes that zig-zag the hills around Charville-Mezieres. On Wednesday the RS4 will hightail it back to the UK, and photographer Kenny P and I will head east across Europe back to Munich. All told the M5 will complete around 1300 miles in three days.

The M5, if not the people inside it, will simply shrug off the distance. Few cars feel as effortless, as majestic as the M5 on delimited autobahns. The high-revving V10 feels a little blunted by the nearly two-ton Touring up to around 70mph, starts to pull hard from there on in and really hits its sweet-spot from 100mph until the limiter chimes in. That’s a bigger window than expected, too: the electronic leash doesn’t tighten until an indicated 275kph or 170mph.

We touch the magic number half-a-dozen times and cruise hard against it for long periods another three times, once on a long uphill drag. The M5 feels stable, comfortable, quiet and slightly frustrated. It hits 170mph at 7500rpm in 6th, there’s still another gear to go and when you pull the right-hand paddle for 7th, after shedding a few mph, the engine note hardens and it really hurtles back into the limiter. Rumours of a 200mph-plus top speed seem entirely feasible…

The miles vanish beneath the M5’s wheels with a distant murmur, the adjustable dampers are on the middle setting (I find full soft a bit too soft; even for motorway driving it’s nice to feel the surface through the seat and steering wheel) and the chassis feels totally assured; even the seven-speed SMG gearbox shifts much more smoothly than previous M5s and M6s I’ve driven. We arrive in Epernay tired but with massive respect for the BMW’s ability to swallow huge distances.

Outside our hotel is a Daytona Grey RS4 Avant, still shimmering in the cool evening air after its long journey from our offices in Northamptonshire. It looks tiny next to the M5. Tiny but very, very tough. There’s not a millimetre of fat, a micron of slack in the whole tense silhouette. It appears to be bursting at the seams, like Audi’s engineers tried to pour too much engine and drivetrain into an unsuspecting A4 shell. Maybe it’s the M5 we should be feeling sorry for… tomorrow we’ll find out.

I’m back in the BMW for the first drive of the day. Click the oblong ‘key’ into its slot on the dash to the left of the steering wheel and the dash flicks into life. Press the big ‘Start’ button and the V10 seems to catch instantly. There’s no look-at-me flare of revs like you might get in an Aston or Ferrari, just a rock-steady idle and a deep, hollow pulse filtering through the interior. It’s a melodic noise, a hint of five-cylinder warble but richer and more complex, and when you blip the throttle the turbine-smooth howl is like nothing else on earth. Hit the Power button to make sure you’re not being short-changed (I couldn’t bring myself to leave the M5 in 400bhp mode, even at a canter on the autoroutes), and the BMW is ready for action.

The vineyards aren’t in bloom just yet, but we’re here for the wide, fast N-roads that cut through the rolling hills and they’re almost completely deserted. Unexpectedly poorly surfaced too, with coarse tarmac that has great divots cut into it in places as well as some tricky cambers in the quicker corners.

The M5 should be perfectly at home here, but in fact it feels slightly wrong-footed. Like many recent BMWs it seems to struggle to contain vertical movements, the suspension particularly upset by a series of rapid-fire bumps, and as it skips from one to the next and you bounce up and down in your seat, the tyres never feel keyed into the surface. The frequency and duration of the traction control’s intervention further undermines your confidence in the M5’s ability to cope with a combination of 500bhp, 1900kg and a road that’s full of surprises. Such is the interruption in delivery that you sometimes wonder if there’s a 300bhp mode that you’ve accidentally selected.

On the faster sections there’s a surprising amount of tramlining, too. It never gets too excessive, but the incredible security we felt on the autobahns is eroded under these more testing conditions. Even on the smooth sections the M5 doesn’t feel quite as special as I’d hoped. The ride settles down, but the traction control is still incredibly busy in the middle and at the exit of any corner. Turn off the DSC and without the guiding hand of the electronics the M5 is more assured, resisting understeer beautifully, but there’s no doubt that it feels very keen to steer from the rear. Maybe a bit too keen if you just want to make quick progress, or if you’ve got an Audi RS4 filling your mirrors…

A day later, following a deeply impressive demonstration of sheer corner-conquering ability by the RS4 climbing the steep hillside route that weaves out of Charville-Mezieres, I fear the M5 will feel clumsy in comparison; big, heavy, slow-witted. It doesn’t. In fact, something miraculous happens. As I gain confidence and the pace rises, so the suspension calms down, the tramlining disappears and the steering comes alive. In contrast to the Audi, understeer simply isn’t an issue and with DSC switched off it seems to find enormous reserves of grip.

On my second run up and down the hill it gets better; by the fourth or fifth pass the M5 is simply brilliant. It seems to soak up all your commitment and turn it into raw speed, like some sort of giant talent-multiplier.

On such a demanding road it’s tricky to keep the V10 right in the sweet spot. Occasionally the fireworks at the top end trick you into thinking that the M5 is a bit too peaky, but in reality it’s already working hard at 3000rpm and feels strong and insistent as it chases 5000rpm. The steering remains heavy, which can disguise the M5’s agility, but when pushing really hard the front tyres respond to the wheel with a beautiful linearity and really cut into the road.

There’s a fast third-gear downhill right-hander that should have the big BMW feeling clumsy and heavy, but it scythes through without a lift, the rear just edging out into mild oversteer. You can almost hear the treadblocks on the front Michelins sinking into the surface whilst the rears rotate just a fraction faster against the abrasive surface to kill any chance of understeer stone dead. This tail-led stance is the M5’s preferred angle of attack and it’s both effective and thoroughly addictive.

Through slower corners you can pretty much please yourself. Keep it neutral with optimum turn-in speed and a balanced throttle; turn in slow and give it a bootful if you want spectacular, wild-looking oversteer, or work within these two extremes to drive out of the corner with just a hint of corrective lock and the V10 shrieking at the top of its voice. In the M5 every corner is a blank canvas.

The brakes seem up to the task, occasionally groaning and even smoking quite alarmingly at one point, but never showing signs of fading. Only the seven-speed paddle-shift gearbox frustrates; it handles upshifts brilliantly but pull back the left-hand paddle for a downshift on the way into a corner and whilst you hear the blip of revs, the actual change is too slow to mesh with it, thumping into gear and upsetting the M5’s composure. Very odd. Even so, the big BMW has taken any doubts we had about its ultimate dynamic abilities and blasted them clean into the next galaxy. When pushed to ten-tenths, the M5 Touring is a fantastic challenge and serious fun.