Sporting one of the finest V8 engines in the world, the RS4 Avant takes the fight to the M5, despite being 86bhp (and £16,000) less endowed 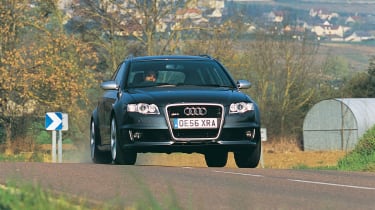 It takes just one corner to understand why the RS4 can hold station with the M5 so comfortably. While the M5 is scrabbling for traction, the RS4 is deep into its power curve and making every single horsepower count. It feels more agile, too. The steering isn’t quite as communicative as the M5’s heavy set-up, but it’s quicker and lighter, making the RS4 feel much more nimble. The nose responds with real snap, and the firm suspension keeps front and rear in perfect unison. Despite being stiffer than the M5 (except in the BMW’s hardest setting, which is really only good for circuit use) the RS4 keeps its wheels in contact with the surface more efficiently. It’s a devastating showing by the Audi.

Having said that, the BMW has the RS4’s number when the road unfurls and starts to sweep rather than switch back on itself. It’s a very odd sensation when you’re absolutely flat in the Audi, V8 at full cry and spinning at 8250rpm, and the back of the M5 Touring just keeps on getting smaller and smaller. It sounds absurd, but if you really wanted to you could nudge the limiter on these N-roads without any problem.

We head away from Epernay stunned by the M5’s turn of speed but deeply impressed by the Audi’s agility, traction and poise. It feels mighty on the autoroute past Reims and up towards Charville-Mezieres, too. It lacks the BMW’s other-worldly top-end, but makes up for that with even greater stability and a torquier delivery that allows you to simply leave it in sixth even when you’re bottled-up behind trucks and want to blitz back up to 100mph. 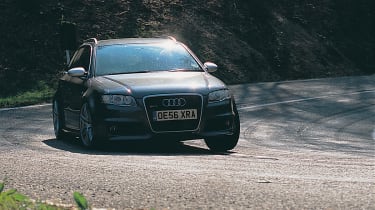 Worryingly for the M5, we’re heading for roads that should be a happy hunting ground for the smaller, lighter RS4. Just the other side of Charville-Mezieres the road narrows as it climbs and weaves its way up a steep hillside. The surface is craggy, many of the corners are blind and the edges are lined with forbidding rocks that will make any mistake potentially very, very expensive. What you need here is something compact, responsive and totally predictable. In other words, what you need is an Audi RS4.

Unsurprisingly the Audi thumps up the hill with sublime confidence. It really does feel narrow, almost old-fashioned compared with the M5 (the interior of the BMW is fresher, and a nicer place to be over long periods) but there’s nothing vintage about its turn of speed. The engine is fantastic everywhere, be it hauling at 3000rpm or hammering past 8000rpm, and the six-speed ’box shifts sweetly, although it feels a little fragile in the face of such a relentless onslaught from the quad-cam V8 and you sometimes seem to beat the syncro on upshifts. No such concern about the eight-pot brakes, which are simply superb.

The chassis balance itself is one of mild understeer. Sense the front running wide and you have to back off – more power equals more understeer. Having said that, on medium speed corners – and if you’re feeling brave enough to turn it in on the brakes – the rear end will start to get involved. It never really kicks out, but you can sense a subtle shift as the car takes on a bit of attitude and keeps the nose pointing at the apex. The RS4 even seems happy to alter its line mid-corner according to your throttle inputs. Clearly the quattro system’s 40/60 front/rear torque split pays dividends here.

So, is there enough to justify the price premium of the M5 over the RS4? Well, there’s no question it has the Audi beaten in terms of pure straight-line pace, nor that it’s a more rewarding and thrilling car right at the limits of grip. But the truth is that you can’t use all of that performance without risking a jail sentence, and it’s very unusual to stumble across roads like the one that rises out of Charville-Mezieres on an everyday basis.

At a slightly saner pace the RS4 is irresistible. It feels all of those 170kg lighter, biting into turns with incredible tenacity and speed, displaying ruthless body control. The V8 works harder lower down the rev-range and the manual ’box is more satisfying. Sometimes the M5 can feel a bit lazy, a bit uninspired, whereas the RS4 always feels keen, alert, instantly responsive. It’s a beautifully executed car and, in Avant form, more desirable than ever. As it stands, it’s our favourite estate. Well, 95 per cent of the time, anyway.